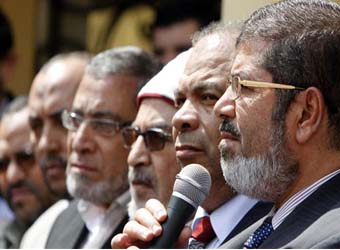 If the newly banned Brotherhood turns to violence, it will only validate a more thorough and perhaps permanent crackdown.

In the 16 months after Hosni Mubarak’s dramatic February 2011 ouster, Egypt’s Muslim Brotherhood quickly rose from the cave to the castle, winning the parliamentary and presidential elections, and then appointing its members to executive positions across the Egyptian government. But 15 months and an uprising-cum-coup later, even the Brotherhood’s former caves are off-limits to it. On Monday, a Cairo court ruled the Brotherhood illegal and authorized the military-backed government to seize its assets and properties.

To some extent, the court’s decision reinforces the decapitation strategy that the military has pursued against the Brotherhood since it toppled Mohamed Morsi on July 3, which has hampered the organization’s capabilities significantly. But whereas decapitation left open the possibility that rank-and-file Muslim Brothers might select new — and perhaps less aggressive — leaders over time, Monday’s court ruling will have much longer term consequences, unless it is overturned on appeal. The prohibition on “all activities” will affect the Brotherhood’s social service networks, through which it reaches out to the Egyptian public and recruits new members, and might also invalidate its political arm, the Freedom and Justice Party.

In the aftermath of the decision, many commentators have insisted that outlawing the Brotherhood will not destroy Islamism in Egypt, and this is certainly true. Theocratic ideologies will always enjoy support in that notoriously religious country, and several Islamist parties — including those that are more radical than the Brotherhood — remain untouched. But Islamism is also safe because, despite its insistence that “Islam is the solution,” the Brotherhood has never articulated a coherent Islamist vision. Far from representing any specific concept of what its stated goal of an “Islamic state” might entail, the Brotherhood is, first and foremost, a cultish and hierarchal vanguard, whose priority is internal cohesion and complete obedience to its own institutional directives. And whereas ideas rarely die, cults often do.

Indeed, the outlawing of the Muslim Brotherhood could, in fact, destroy it, at least within Egypt. But that would still leave perhaps hundreds of thousands of rank-and-file former members, who are unlikely to abandon the radical quest for total control — “Islamizing the society” and then “Islamizing the state,” as they term it — that the Brotherhood indoctrinated them to pursue during the five-to-eight year “tarbiya” process through which one becomes a brother. So what will these ordinary Brothers do? I can anticipate three possibilities, two of which would provide a basis for possible resurrection.

First, in lieu of the organization’s nationwide command chain, ordinary Muslim Brothers may generally look towards those leaders who have gone into exile for guidance. The Brotherhood has already moved its media operations to London, and at least three of its six top leaders are outside of Egypt: Secretary-general Mahmoud Hussein is in Turkey and deputy supreme guide Gomaa Amin is in London, while deputy supreme guide Mahmoud Ezzat is believed to be in Gaza. (The whereabouts of a fourth top leader, Mahmoud Ghozlan, are unknown.) From this foreign perch, Brotherhood leaders have rejected an Egypt-based leader’s attempt at reconciling with the Egyptian public, and called on Muslim Brothers in Egypt to continue protesting against Morsi’s ouster — which they have done, albeit with much lower numbers than before. While the Brotherhood would not be able to coordinate highly detailed activities from abroad without a command-chain within Egypt, it could keep ordinary Brothers engaged, thus keeping the ground fertile for Brotherhood leaders to return and reestablish the organization if and when a political opening emerges.

Second, ordinary Muslim Brothers may decide to participate in elections, perhaps after a few years, as independents. Without a national organization controlling their strategy, they might decide to run in some areas and not others, and they would stand a better chance of performing well than is currently appreciated. While it is true that the Brotherhood is extremely unpopular at the moment, this could change as Egypt’s economy continues its decline under the military-backed government. More importantly, given that the more local levels of the Brotherhood’s leadership have not been arrested, Muslim Brothers could coordinate within districts to choose candidates and efficiently mobilize supporters through interpersonal networks that will survive even without the Brotherhood’s hierarchy. The fact that Egypt’s political field is otherwise deeply divided among dozens of parties, many of which are barely distinct from one another ideologically as well as poorly organized, would advantage well-organized Brotherhood independents. Brotherhood independents might then use those victories to push for renewed freedom for resurrecting their now-defunct organization.

Third, ordinary Muslim Brothers may abandon the Brotherhood and turn to other Islamist movements, including violent ones. After all, younger Muslim Brothers tend to be more radical than their strategically conservative leaders, and they may now act on that radicalism. Moreover, rank-and-file Muslim Brothers have used violence as a political tool in the recent past — most notably last December, when Brotherhood cadres attacked, tortured, and killed protesters outside the presidential palace in northern Cairo. And history is rich with examples of Muslim Brothers who turned towards jihadi activities during periods of state repression.

It is precisely this scenario that worries Egypt observers, and some have argued that Washington should have firmly rejected Morsi’s ouster precisely to prevent Muslim Brothers from taking up arms. This argument, however, creates the false choice between a violent Brotherhood out of power and pacific Brotherhood in power: During Morsi’s year in office, the Brotherhood repeatedly demonstrated its totalitarian aims and its willingness to use violence against its opponents in pursuing those aims. This is a big part of the reason that millions of Egyptians rose up against it in the first place.

But more to the point, individual Muslim Brothers’ turn towards terrorism would validate an even more thorough regime crackdown — one that would not only target the Brotherhood’s organization, but its rank-and-file members broadly. The appropriate analogy would be the Syrian Muslim Brotherhood, which was routed from Syria in 1982 after a subset of its members known as the Fighting Vanguard took up arms against the regime, and has been practically nonexistent in that country for three decades.

In other words, Muslim Brothers’ turn towards violence would simply make the effects of Monday’s ruling permanent.

Eric Trager, the Esther K. Wagner Fellow at The Washington Institute, is an expert on Egyptian politics and the Muslim Brotherhood in Egypt. He was in Egypt during the 2011 anti-Mubarak revolts and returns frequently to conduct firsthand interviews with leaders in Egypt’s government, military, political parties, media, and civil society. His writings have appeared in numerous publications, including the New York Times, Wall Street Journal, Foreign Affairs, the Atlantic, and the New Republic.

Dr. Trager is an adjunct professor at the University of Pennsylvania, where his doctoral research focused on Egyptian opposition parties. From 2006-2007, he lived in Egypt as an Islamic Civilizations Fulbright fellow, where he studied at the American University in Cairo and received his M.A. in Arabic studies with a concentration in Islamic studies. He served as a research assistant at The Washington Institute from 2005 to 2006 upon graduation from Harvard University with a degree in government and language citations in Arabic and Hebrew.