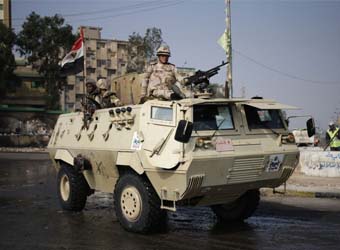 Share
Egypt’s interior ministry announced on Saturday that security forces had raided a hideout belonging to the Hasm terrorist group at a farm on Korayemat road, near Atfih in the Giza province, killing three leading members of the group in a shootout.

“The farm was used as a base for plotting and committing terrorist actions and for manufacturing explosives. A cache of weapons and ammunition was seized,” the ministry said in a statement.

“Under the framework of proactive security efforts against terrorist groups, the ministry had uncovered a plan by Hasm to commit hostile actions that target touristic and other vital facilities, as well as police and armed forces, during Christmas celebrations in an attempt to cause instability and portray a negative image of the security situation in Egypt.”

Ten other members of that group who are involved in the terrorist plot were caught in the governorates of Fayoum and Qalyubia at locations also containing ammunitions and other tools, which were uncovered by police.

The ministry added that information confirmed the involvement of those elements in firing upon security forces on a road near Fayoum, 60km (40 miles) south of Cairo, in July 2017. That attack resulted in the killing of one security member and the injury to another, the statement reads.

“Information also revealed that those arrested received training on using arms and manufacturing explosives at a location in Egypt’s Western Desert in the Fayoum governorate, where plotters had listed a number of touristic and security spots in preparation for a planned Christmas attack, following the orders of a fugitive Muslim Brotherhood figure in Turkey,” the ministry added.

The ministry announcement comes one day after a gunman killed several people in an attack on a church in Helwan, south of Cairo, before being shot and captured by police.

The interior ministry is beefing up security as Egyptian Coptic Christians, who make up around 10 percent of the country’s 93 million population, prepare for Christmas on 7 January.

Friday’s attacker in Helwan attempted to drive through security forces outside the Mar Mina church armed with a machine gun, ammunition and a bomb that he intended to detonate in the church.

The ministry said he killed two people when he opened fire on a shop, before heading to the church where he shot dead seven people, including a policeman.

Dozens of Christians have been killed in terrorist attacks on churches and congregations in recent years.

Police have deployed 230,000 personnel to protect churches, parks and other vital public institutions during the Christmas season.