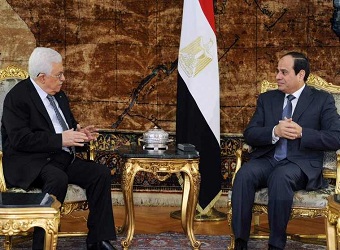 Egyptian President Abdel Fattah al-Sisi spoke by telephone on Wednesday with his Palestinian counterpart Mahmoud Abbas, discussing the latest developments in Palestine, the revival of the stalled peace process, and the status of the disputed city of Jerusalem, according to official media statements.

The Egyptian president’s office said that President Sisi reaffirmed Egypt’s continued support for an independent Palestinian state in accordance with international resolutions. The two leaders also agreed to continue coordination and consultation regarding developments in Palestine, the statement said.

Meanwhile, WAFA, the news agency of the Palestinian Authority, said Sisi and Abbas discussed the latest developments concerning the city of Jerusalem. US president Donald Trump is expected to recognize Jerusalem as the capital of Israel on Wednesday.

Egypt has maintained its position regarding the need for a two-state solution to the Israel-Palestine issue, with East Jerusalem recognised as the capital of the Palestinian state.