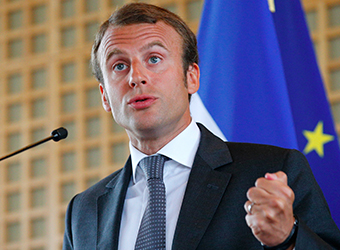 According to the statement, the Egyptian president called Macron to congratulate him on assuming office as the president of France.

The two leaders discussed Egyptian-French relations, and Sisi expressed his hopes of working with Macron to bolster cooperation and coordination with Egypt on a number of regional and international issues of mutual interest.

According to the Egyptian president’s office, the two also discussed ongoing cooperation between Egyptian and French authorities on investigations into the causes of the deadly crash of EgyptAir MS804 flight into the Mediterranean in May 2016.

Sisi and Macron also discussed the latest developments in the Middle East, including Egyptian efforts to restore stability in Libya and support a political transition in the war-torn country.

Terrorism is the greatest challenge in region: Egypt’s Foreign Minister