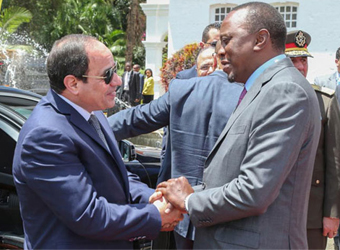 “Egypt will not spare any effort in bolstering its strategic relationship with Kenya in all aspects, especially in the area of development,” Sisi said at a press conference with Kenyatta.

“Egypt and Kenya are connected by a single artery, the River Nile, as well as a long history of constructive cooperation,” Sisi said, adding that the two countries share the same hopes and aspirations as they both seek economic development and prosperity.

Sisi said he agreed with Kenyatta that development efforts should be undertaken in all Nile Basin countries to make the most out of this vital artery.

The Egyptian president said the talks with his Kenyan counterpart revolved around ways of strengthening the economic and commercial relationship between the two countries to fulfill their mutual interests.

Sisi also said that the two leaders agreed on intensifying efforts to restore stability in East Africa and the Horn of Africa.

In November, Kenya’s Vice President William Ruto visited Cairo to discuss with Sisi the strengthening of cooperation in various fields between African countries in general and Nile Basin countries in particular.

Ruto announced at the time that Kenya has exempted Egyptians from obtaining travel visas in advance to visit the country.

After night in cell, Samsung scion taken for questioning