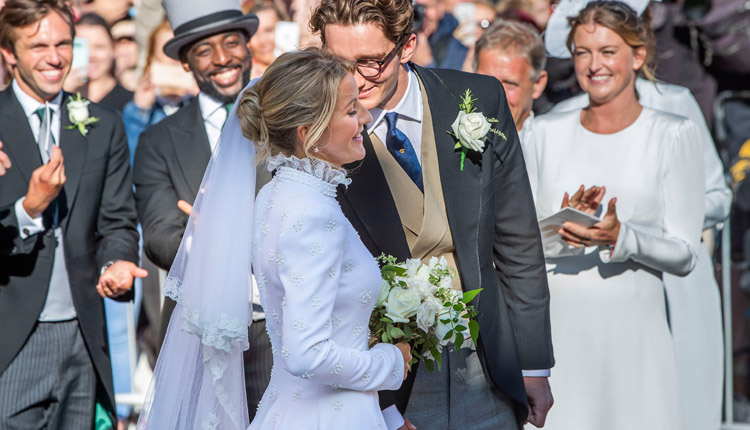 Pop stars, artists and royalty were among the guests at York Minster.

Sarah, Duchess of York and her daughters, Princess Beatrice and Princess Eugenie, were among the guests.

A reception was held afterwards at Castle Howard, near Malton, about 15 miles (24km) from York.

She arrived at the cathedral in a blue Volkswagen camper van and was greeted by cheers from the large crowd.

The singer went sweet and old-fashioned instead of sexy for her wedding dress choice, stunning the crowd with a long-sleeved, high neck look. She walked down the aisle in an elegant custom Chloé wedding dress.

Goulding’s silk double crêpe dress was designed by Natacha Ramsay-Levi, who said the musician was “very involved in the design.”

“We worked on a collage of references from the Victorian era that she wanted to weave into the design, in dialogue with the historical York cathedral where the ceremony was to take place,” Ramsay-Levi explained. “Her creative point of view made the process fluid and inspiring, and I feel that the end result really reflects her personal sense of style.”

The gown was hand-embroidered with White Roses of York, embellished with white glass beads, and took more than 640 hours to construct. Goulding’s silk tulle veil added a personal touch to her ensemble, as it was embroidered with her and Jopling’s initials, E and C.

“I was so thrilled and excited to collaborate with Natacha at Chloé on my wedding dress,” Goulding said. “I have loved the brand and their incredible team for years, so it only seemed right for Chloé to play a big part of this special day.”

“Natacha worked alongside me to design something timeless and classic, but with all the Chloé spirit,” the bride continued. “Natacha is a very talented designer and I have admired her work from day one. I have never felt more special than the moment I first tried on the dress during my fitting in Paris, it was utterly awe-inspiring to see the craftsmanship and attention to detail.”

The bridesmaids also wore Chloé dresses, designed by Ramsay-Levi, in a pale blue color embroidered with an organza braid.

In a playful touch, the bride was seen climbing out of a blue VW camper van on her way to the cathedral. 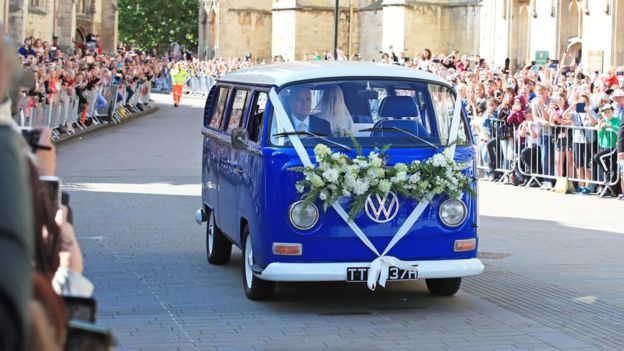