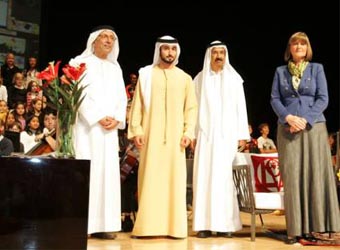 The fourth annual Emirates Airline Festival of Literature opened Tuesday with a spectacular display of words, poetry and dance.

The guests were greeted on their arrival by Youla dancers and a vibrant performance began with flag carrying scouts paying tribute to the 30 home countries of this year’s participating authors.

Over 500 local performers and school children captivated the audience which included senior government officials, diplomats, representatives from major business and educational institutions and others.

The boys and girls who performed were dressed in ethnic costumes of the countries they represented, according to Gulfnews.

“In only four years together we have built this festival into one of the worl’s significant literary festivals. We are welcoming a power house of talent from around the globe here today. Amd we are seeing more and more talent emerging from Dubai itself too,” said Isobel Abulhoul, Festival Director.

More than 120 authors are participating in the festival this year.

The five day festival is held under the patronage of His Highness Sheikh Mohammed bin Rashid Al Maktoum, UAE Vice-President and Prime Minister and Ruler of Dubai, and in partnership with Emirates Airline and the Dubai Culture & Arts Authority (Dubai Culture), the Emirate’s dedicated Authority for culture, arts, and heritage.