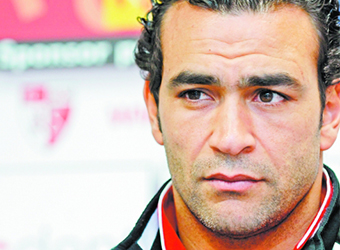 Egypt keeper Essam El-Hadary will be facing a stern test against Egyptian League leaders Ahly as he will be tasked with keeping a seventh straight clean sheet for Wadi Degla at Petrosport Stadium on Thursday.

Following a superb Cup of Nations campaign with Egypt, who eventually lost the title after a 2-1 defeat to Cameroon in the final, 44-year-old El-Hadary will be hopeful of retaining his position in the Pharaohs’ goal.

After being preferred by Egypt manager Hector Cuper to stand between the sticks in the two opening World Cup qualifying wins over Congo and Ghana, El-Hadary seemed to have fallen down the pecking order in the Nations’ Cup.

Ahmed El-Shennawi started for Egypt in the opening Nations’ Cup fixture against Mali, but an early injury meant former Ahly keeper El-Hadary was summoned to replace the Zamalek keeper.

From thereon, El-Hadary continued to impress, keeping a clean sheet throughout the group-stage and the 1-0 quarter-final victory over Morocco.

Despite conceding in the semis against Burkina Faso, El-Hadary still proved crucial in his side’s qualification for the final with a standout performance in the penalty shootouts.

The veteran keeper did look a little bit shaky in the final defeat to Cameroon, but will now be determined to remain in top form ahead of Egypt’s first competitive match against Tunisia in the Cup of Nations qualifiers in June.

A meeting with defending champions Ahly will not be the easiest of tests though, with the Reds expected to dominate possession and pile up the pressure from the opening stages.

The return of Egypt team-mate Abdallah El-Said is likely to give Ahly further boost in midfield, with the playmaker’s creativity meaning the Reds will be able to see more of the goal.

Forwards Junior Ajayi and Amr Gamal are available to lead the line, but the introduction of veteran striker Emad Meteb could mean Ahly have strong penalty-box presence following the latter’s goal in the 2-0 win against Arab Contractors barely a minute after coming off the bench.

New winter-signings Ahmed Hamoudi and Souleymane Coulibaly continue to miss out, with Ahly boss Hossam El-Badry seemingly not ready to give them playing time in their first weeks at their new club.

Ahly are currently in charge of the league table on 49 points, eight ahead of second-placed Maqassa. Wadi Degla, managed by former Zamalek manager and ex-Tottenham striker Mido, are Eighth.