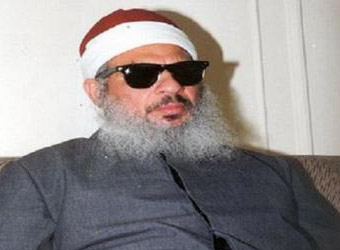 The son of the late spiritual leader of Egypt’s Al-Gamaa Al-Islamiya group Omar Abdel-Rahman said the Egyptian foreign ministry made every possible effort, upon the directive of the president, to transfer his father’s body back to Cairo to be buried in his birthplace in Daqahliya governorate.

Abdel-Rahman, also known as the Blind Sheikh, died at age 79 on Saturday, while serving a life sentence in the United States for his involvement in the 1993 World Trade Center bombing in New York, in which six people were killed and hundreds injured when a truck bomb detonated in the building’s garage.

He was also convicted of plotting to bomb other New York targets, including the United Nations headquarters, and assassinate former Egyptian president Hosni Mubarak.

Abdel-Rahman’s son Ammar said one of President Abdel Fattah al-Sisi’s advisors called his brother Mohammed Wednesday to extend condolences to the family and affirm the president’s instructions to honour his late father’s will as an Egyptian citizen.

The deceased’s family received the deceased’s casket at Cairo International Airport Wednesday morning, in preparation for a funeral at his birthplace in Daqahliya governorate the same day.

Sources at the airport said special security procedures were put in place to deliver the body.

Abdel-Rahman’s family, supporters, and some Egyptian human rights organisations had demanded in recent years that he be transferred to Egypt due to his deteriorating health.

Supporters also complained of strict special administrative measures that prohibited anyone, including his lawyers, from providing information to anyone outside the prison about his condition.

U.S. officials have denied these charges, saying that Abdel-Rahman received the medical attention he required.