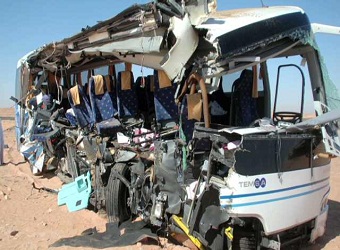 Five people were killed on Saturday when the bus they were travelling on crashed on the Cairo-Alexandria Agriculture Road, Al-Ahram Arabic website reported.

Initial investigations revealed that the bus crashed after it was struck by a spare tire that flew off the top of another vehicle.

The driver of the privately-owned bus was injured in the crash.

In 2015, Egypt saw 25,500 road fatalities and14,500 car accidents, the official statistics agency CAPMAS reported in its ‘Economic cost of road accidents in Egypt in 2015’ study published in August 2016.

According to a 2015 global status report on road safety published by the World Health Organisation, Egypt’s fatality rate ranked 16th among Arab countries and 109th globally out of 180 countries.

US intelligence agencies feud with Republicans over Russian hacking