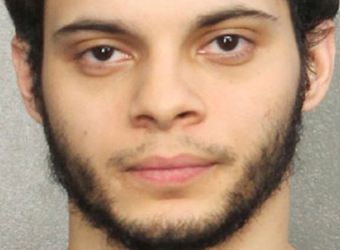 A 26-year-old Iraq war veteran suspected of opening fire in a crowded Florida airport last week has appeared in court to hear charges against him.

During a 15-minute court appearance on Monday he was told by the judge that he may face the death penalty.

Santiago answered the judge’s questions in a clear voice.

He spoke very little during the hearing and confirmed to the judge that he understood the criminal charges and that he is a US citizen.

When asked about his employment, he told the judge that he worked for the Signal 88 security firm in Anchorage, Alaska, for the last few years and that he currently has only $5 to $10 in his bank account.

Security was high outside the courtroom, with more than 25 armed police guarding the building.

Santiago wore a red jumpsuit and was shackled at the wrists, stomach and legs throughout the hearing.

Authorities say they have not ruled out terrorism as a motive, and that they are investigating whether mental illness may have played a role in the attack.

In November 2016, Santiago visited an FBI building in Anchorage to tell agents he was hearing voices and believed that US spies were trying to control his mind.

According to a criminal complaint, Santiago told investigators that he flew one-way from Alaska to Florida to carry out the attack.

Agents say he checked a handgun into his luggage.

He retrieved the gun from the baggage carousel, and loaded it in a bathroom before emerging and firing at random, investigators say.

Six other people were wounded by gunshots at the airport’s baggage claim area.