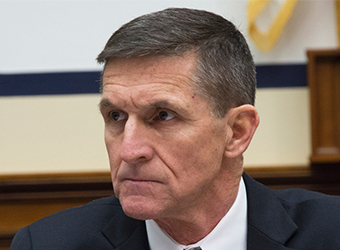 Leading members of the US Republican Party have joined calls for a wide investigation into the former national security adviser’s links with Russia.

Michael Flynn quit on Monday over claims he discussed US sanctions with Russia before Donald Trump took office.

On Tuesday, a White House spokesman said Trump knew weeks ago there were problems with the Russia phone calls.

But calls for an independent investigation have encountered a cold reaction from some senior Republicans.

The development came as the New York Times reported that phone records and intercepted calls show members of Trump’s presidential campaign, as well as other Trump associates, “had repeated contacts with senior Russian intelligence officials in the year before the election”.

However, officials spoken to by the newspaper said they had not yet seen evidence that Trump’s campaign colluded with Russia on the hacking of the Democratic National Committee or to influence the election.

He stood down over allegations he discussed U.S. sanctions with a Russian envoy before Trump took office.

It would have been illegal for Flynn to conduct US diplomacy as a private citizen, before he was appointed as national security adviser.

Acting Attorney General Sally Yates had warned the White House about the contacts and that Flynn might be vulnerable to Russian blackmail on 26 January, said White House spokesman Sean Spicer.

Trump had initially concluded that Flynn’s actions did not violate any law, according to Spicer.

The White House counsel then conducted an extensive review and questioned Flynn on multiple occasions before arriving at the same conclusion as Trump, Spicer added. But the trust had gone.

“In the end, it was misleading the vice-president that made the situation unsustainable,” White House Counsellor Kellyanne Conway said on Tuesday.

Flynn was also reportedly questioned by FBI agents in his first days as national security adviser, according to US media.

In an interview conducted with the conservative website The Daily Caller on Monday, but published only on Tuesday, Flynn said he crossed no lines in his conversation with the ambassador.

He said he was concerned that the apparently classified information had been leaked.

“In some of these cases, you’re talking about stuff that’s taken off of a classified system and given to a reporter. That’s a crime.”

In his first public comments about the controversy, Trump tweeted on Tuesday: “The real story here is why are there so many illegal leaks coming out of Washington? Will these leaks be happening as I deal on N Korea etc?”

Republican John McCain, Chairman of the Senate Armed Services Committee, said Flynn’s resignation was a “troubling indication of the dysfunction of the current national security apparatus”, which raised questions about Trump’s intentions towards Russia.

Senator Roy Blunt, a Republican member of the Senate Intelligence Committee, called for an investigation into any alleged connections between Mr Trump and Russian officials.

Meanwhile, US House Intelligence Committee Chairman Devin Nunes, also Republican, told reporters on Tuesday he wanted to investigate the leaks that led to Flynn’s resignation. He also said the FBI should explain why Flynn’s conversation had been recorded.

However, House Speaker Paul Ryan sidestepped questions on whether he backed an independent investigation.

The Senate’s most senior Republican, Mitch McConnell, said the intelligence committee was already looking into Russian influence on the election, indicating there was no need for a new investigative panel.

Kremlin spokesman Dmitry Peskov said Russia would not be commenting on the resignation.

Congressional Democrats John Conyers and Elijah Cummings have demanded a classified briefing to Congress on Michael Flynn by the justice department and FBI.

“We in Congress need to know who authorised his actions, permitted them, and continued to let him have access to our most sensitive national security information despite knowing these risks,” their statement said.

On another busy day for the Trump administration: