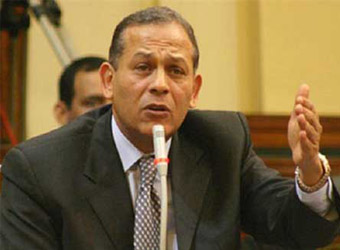 Mohamed Anwar El-Sadat, the former MP and head of the human rights committee in the Egyptian parliament, announced in a press conference on Monday that he will not run in the upcoming presidential elections, which are set for March, citing “indicators of the electoral scene not being reassuring”.

In a press conference at the Heliopolis headquarters of the Reform and Development Party, of which he is chairman, El-Sadat said he took his decision after “much consideration and examination of reality”, adding that the decision to not continue in his presidential bid was “reached regrettably”.

“I continue to play my part in defending the issues, concerns and problems of citizens and their rights and freedoms. I do that with an undying hope in a better future that we will live one day when there is a different environment and a belief in popular will and the right of people to determine their fate and participate in governance,” he said.

El-Sadat explained his decision was not an individual one but was based on the desire of “many who had confidence in me and my vision for the future and necessary reform.”

The nephew of the late president Anwar El-Sadat praised the efforts of his campaign staff, who have been working for several months to collect donations from businessmen and signatures of endorsement from the public to make his nomination official.

“However, it seems that all of this was not enough and would not be effective without faith and conviction in democracy and the idea of peaceful transition of power and that a president will not stay in power forever,” El-Sadat said.

He stressed that the general atmosphere was not conducive to a fair competition, especially with what he described as other “state-led campaigns collecting signatures for President Sisi ahead of the official start of the nomination process.”

The National Electoral Authority (NEA), the body which regulates the election process, announced last week that it will receive applications for candidacies from 20 January until 29 January.

So far around 500 members of parliament– out of 596 in total– have signed recommendations in support of current Egyptian President Abdel Fattah al-Sisi running for a second term as president.

On Sunday, the NEA said that the number of endorsements for different presidential hopefuls had reached around 250,000, as of Sunday afternoon. According to the authority, there were signatures of support for 21 names.

Sisi has not yet officially announced his intention to run in the spring elections.

Ali is currently appealing a 3 month prison sentence he received in 2017 for offending public decency. Ali could lose eligibility for becoming a candidate for president if he loses the appeal.

The 2018 elections are the first to be supervised by the recently-established NEA, the independent authority with the sole responsibility for supervising general elections and referendums in Egypt.