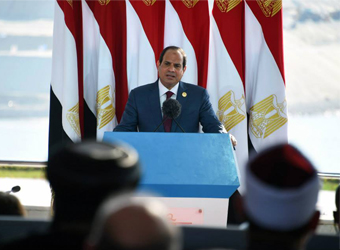 President Abdel Fattah Sisi appeared in a TV interview, Monday, with French state-run TV channel, France 24, in which he tackled human rights issues and conditions in Egypt as well as the country’s war against terrorism.

Sisi: Egypt is doing its best to respect human rights

During the interview, Sisi stated that Egypt pays great respect to human rights and works effectively to guarantee the dignity of the people, saying that there were no political detainees in Egypt.

“Egypt is doing its best to respect human rights, Egyptians have elected me to undertake this task,” Sisi said during the interview.

The Egyptian president asserted that the convicted Muslim Brotherhood members are being subjected to fair trials that are in accordance with Egyptian law, calling on any human rights group to visit Egyptian prisons to check the prisoners’ conditions.

He further explained that all people who were arrested had been convicted on charges that are first investigated followed by a trial. Investigations may or may not prove their innocence, he added.

Sisi called on human rights organizations to expand their work and conduct thorough overviews on the human rights conditions in Egypt, saying that he did not accuse any organization of any charge.

“I did not accuse any human rights organization of anything. These organizations should know more about the Egyptian situation, as sometimes matters are being covered in an inaccurate way. There is a systematic campaign against Egypt,” he said.

Regarding current counter-terrorism strategies, Sisi said that the remarkable success against terrorists and militias in countries such as Syrian and Iraq had pushed these extremists towards new destinations such as Egypt, Libya, Sinai Peninsula and West of Africa.

“We all should collaborate together to prevent the arrival of these militants, their weapons and financial-backing.  Over the past three years Egypt has destroyed 1200 vehicles loaded with weapons and militants ,” he noted.

A recent military confrontation between police forces and anonymous militants near El-Wahat El Baheria located between Giza and Fayoum governorates, resulting in the death of 16 officers, spurred security discussions.

Sisi said that no one can secure borders that extend 1200 KM into desert areas, but promised that investigations into the clash is ongoing.

Sisi repeated his call to countries that are financing and supporting terrorism to suspend their activity, saying that there are certain countries that conduct this operation through not only logistic support, but through moral, political and media support.

“I will not name the specific countries responsible for financing terrorism, but I need to say that suspending finance of terrorism will not only contribute in keeping Egypt’s national security,  but will contribute in preserving the world’s security. There are millions of refugees who have been killed in countries such as Syria, Iraq and Libya,” he added.

Sisi refused to call the

members of the militant groups ‘militants’ during the interview, but instead stressed that these perpetrators were ‘terrorists’, who work to destroy human life.

The diplomatic boycott declared in May by Saudi Arabia, Egypt, UAE and Bahrain against Qatar continues to be a talking point of concern. Sisi asserted that Qatar should suspend providing support to the MB and interference in Egypt’s internal affairs.

He added that for the sake of restoring natural relations with Qatar, the country must comply with the 14 demands laid out by the Arab nations.