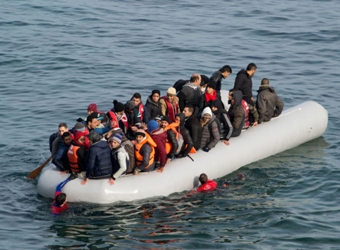 Getting Europe’s migrant crisis under control will be the main focus of a summit of Europe’s ’big four’ continental powers hosted on Monday by French President Emmanuel Macron, who has invited three African nations to the talks in Paris.

European countries are at loggerheads over how to deal with the arrival of hundreds of thousands of people fleeing war, poverty and political upheaval in the Middle East and Africa.

Over the summer, Macron sought to take the initiative on trying to manage the influx crossing the Mediterranean from Libya.

He proposed the establishment of hot spots in Africa to handle asylum requests, an idea whose viability was questioned by European and African allies, officials and experts said.

Diplomats said the summit on Monday, which will host Germany, Italy and Spain as well as the leaders of Chad, Niger and Libya, aimed to assess the situation.

“It appears that migration is a priority subject for all these countries,” an Elysee official told Reuters, pointing out that Paris wanted to find ways of managing migration at earlier stages.

“They all agree it would be useful to have the three countries …. Chad and Niger which are points of passage to Libya, which is where we have a growing number of refugee camps which is extremely worrying,” the official said. Experts do not expect any breakthroughs.

“The hotspots announcement was nonsense and neither Chad nor Niger were consulted beforehand,” a West African official said.

“Macron is trying to make up for that mistake. It will be a meeting on the hotspots and immigration in general, but we don’t expect much to come from it,” the official said.

Niger would be looking for more financing to help with general security measures, a Niger presidential source said, adding there was nothing necessarily new regarding asylum request hotspots as they already existed, but any further developments on this front from European countries would be welcome.

A French diplomat said a report commissioned to look at the feasibility of such a project could be presented on Monday.

European foreign policy chief Federica Mogherini will also attend the meeting and emphasize the importance of an united European front on the matter, the Elysee said.

“We hope to accelerate the dispersal of EU funds that have already been promised to Libya,” an Italian government source said.

“More generally, Italy and Germany have pledged funds to Libya and to other African countries to try and get control of immigration, but France and Spain need to do more,” the Italian official said.

In the wake of last week’s attacks in Spain, Italian and Spanish officials said they also wanted to discuss counter-terrorism cooperation during an evening session between the four European countries.

“I see it more as a four-way meeting with a European focus with immigration and Libya losing a bit of importance to the fight against terrorism,” a second Italian government source said.

Spanish Prime Minister Mariano Rajoy told a news conference on Friday he wanted EU partners to “analyze the current cooperation mechanisms” on counter-terrorism and look at options to boost them and improve them during Monday’s meeting.