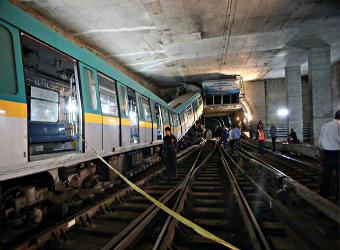 No decision has yet been made to increase Cairo Metro ticket prices further, though they may be raised after a future service uprgade on several lines, according to Ahmed Abdel-Hady, spokesman for the Egyptian Company for Metro Management and Operation on Ahmed Moussa’s television show on Sada El-Balad TV Channel.

The spokesman refuted recent media reports of coming increases in metro ticket prices, stressing that the responsibility for such a decision lay with the Ministry of Transportation, and not with his organization.

Abdel-Hady said that any increase would be dependent upon the introduction of new stations in the underground system’s third line, as well as the installation of new service equipment in lines one and two, which comprise the metro’s oldest.

Over the past week, several media outlets quoted officials saying that a new hike was expected soon, suggesting that the new fare would depend on the number of stations the passenger intends to pass through.

“The study of fare increases is one that is prepared by the transportation ministry. We, as a company, only follow orders. When they give us instructions to increase the fare, we do,” Abdel-Hady said.

The Egyptian Company for Metro Management and Operation, which was established in 1984 to operate, maintain and manage the Cairo Metro, generates its revenues from individual tickets and subscriptions.

Then in July, Egypt’s Minister of Transportation Hesham Arafat said in an interview that ticket prices for Cairo’s metro system are expected to see a gradual increase, eventually reaching EGP 4 by the last quarter of 2018.

In recent years, officials have urged the country to increase ticket prices in order to fix the financial woes of Cairo’s vital metro underground service, which reportedly has EGP 500 million of debt.

Metro officials have repeatedly said the low ticket price is a key factor in financial losses by the service, and have argued that increasing ticket prices could double annual revenues.

Cairo’s underground train system, launched in 1987, is one of the oldest in the Middle East and Africa.

Over 3.5 million of Greater Cairo’s 21 million inhabitants rely on the subway for their daily travel, according to estimates by the country’s National Authority for Tunnels.