The new coronavirus — believed to have first emerged in the Chinese city of Wuhan — is often compared to SARS, which originated in China’s Guangdong province in November 2002 before spreading worldwide.

The two diseases are the same large family of viruses that usually infect animals but can sometimes evolve and spread to humans. Investors and analysts often compare the two viruses to assess the potential economic impact from the latest outbreak.

SARS, or severe acute respiratory syndrome, was also a strain of coronavirus that killed hundreds nearly 20 years ago. But, recently, the death toll related to the new disease have exceeded that.

That’s why China’s government has taken more drastic moves this time to contain the new coronavirus. That’s one reason why an increasing number of economists are forecasting a larger hit to the Chinese — and global — economy from the new virus compared with SARS in 2003. 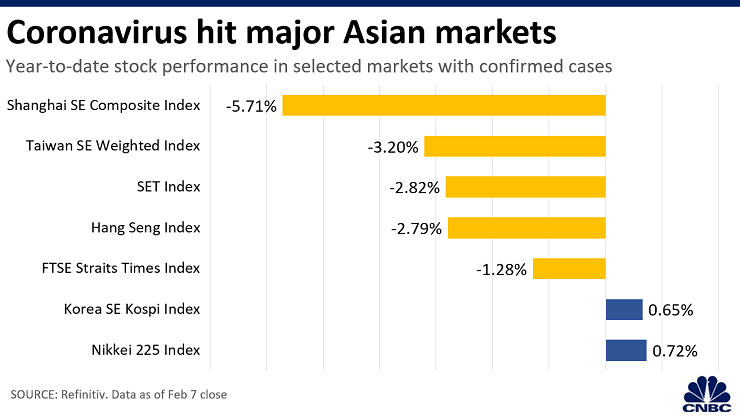 In 2003, the spread of SARS dragged down China’s growth from 11.1 percent year-on-year during the first quarter of the calendar year to 9.1 percent in the following three months, according to data from the National Bureau of Statistics of China.

The then-sixth largest economy in the world also witnessed slower growth in retail sales and industrial production, but expansion in its exports remained steady throughout 2003. China’s retail sector was among the worst hit by the SARS epidemic. Growth in retail sales moderated to 4.3 percent in May 2003 — the slowest pace on record, according to Refinitiv. 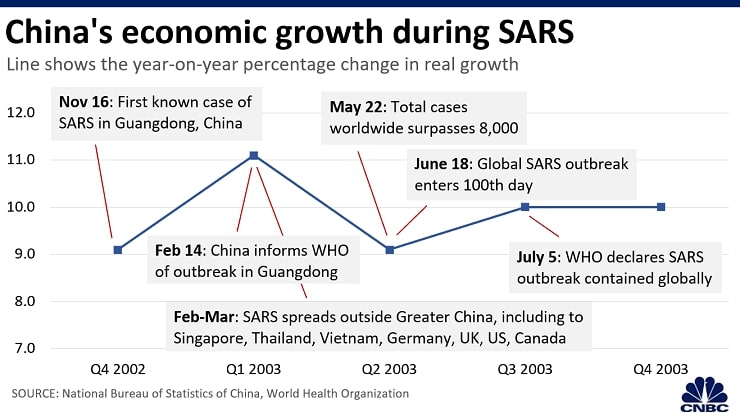 This time, several economists said the new coronavirus will mostly affect China’s first-quarter growth. Some banks and research houses have cut their forecasts for China’s full-year growth by 0.2 to 0.7 percentage points — to as low as 5 percent in 2020.

Analysts have said that retail is expected once again to suffer the most from the spread of the new coronavirus, especially after the Chinese government locked down cities and restricted travel within the country.

But as with the SARS experience, economists said retail sales in China could bounce back when the new coronavirus is contained. That’s when consumers would go ahead with the spending that was held back by the virus outbreak, some analysts explained.

The industrial segment was also hit by the SARS epidemic, with growth in production slowing to 13.7 percent in May — the slowest expansion seen in the whole of 2003, according to Refinitiv data.

The drag on China’s industrial production from the new coronavirus could be more severe, some analysts forecast. That’s because factories in multiple major Chinese cities have remained shut as authorities rush to contain the virus, they explained. 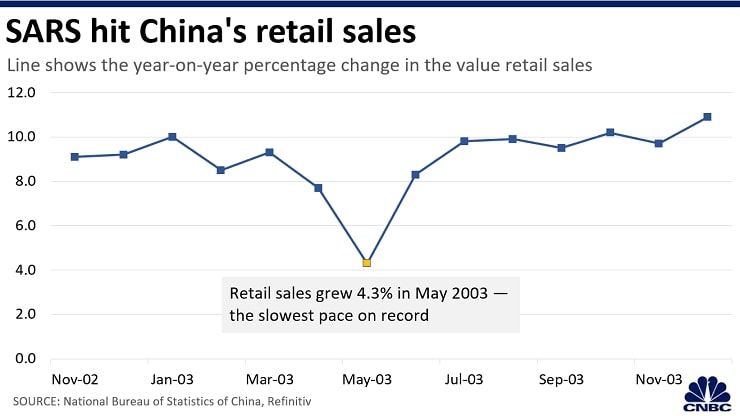 Economists from French bank Societe Generale said they forecast the coronavirus “to be brought under control” in the later part of the first quarter, which would enable industrial firms to “raise capacities to meet orders.” But the economists warned that the situation in China may not improve as they forecast.

Meanwhile, growth in Chinese imports moderated following the SARS outbreak, but the expansion in exports was steady throughout 2003, official data showed. 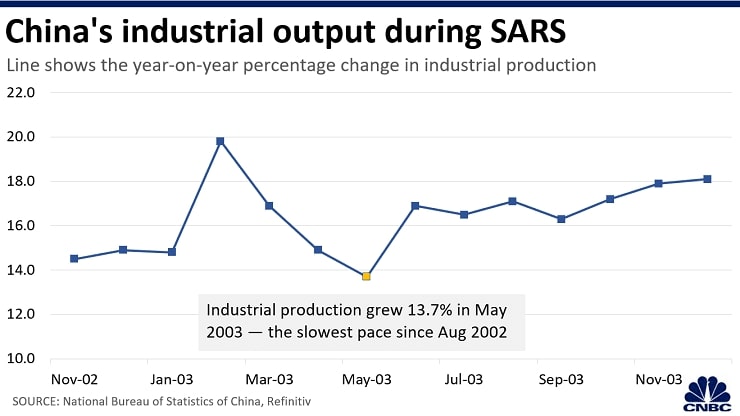 The global economy was coming out of a downturn in 2001 to 2002 and demand for China’s exports was just picking up when the SARS outbreak took place. That helped the Chinese economy to recover from the epidemic, Australian bank Macquarie said. 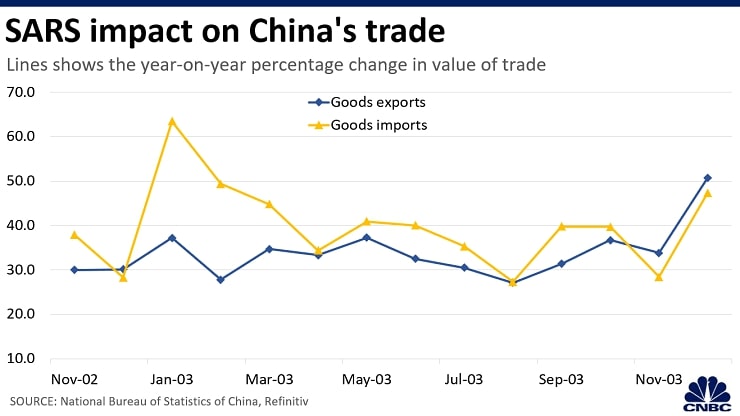 However, economists from S&P Global Ratings said both China’s imports and exports will be hit this time due to “supply outages and disruptions to the logistics networks.”