How to Oust a president, Egyptian-Style 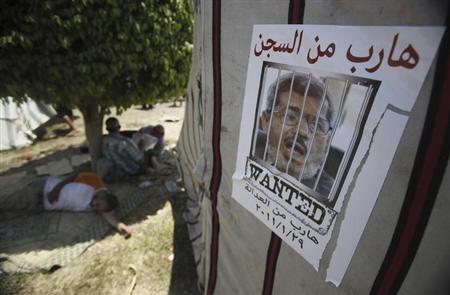 Hearing their bright-eyed talk around a cafe table of a peaceful new Egyptian revolution, you might dismiss Mahmoud Badr and the other young instigators of a petition asking for a new president as hopeless dreamers.

Except they managed it once before – Cairo twentysomethings just like these, in their deck shoes and Tommy Hilfiger T-shirts, checking iPads and puffing on low-tar Marlboros over Turkish coffee, a few blocks from Tahrir Square.

In 2011 this generation, armed with Facebook, brought out Egyptians of all ages and backgrounds in protest and, to the world’s amazement, toppled the “Pharaoh” Hosni Mubarak.

Can they do it again? Can they get millions back into the streets from Sunday and force President Mohamed Mursi to step aside, perhaps with a nudge from the army? Can they end the Islamist rule which Badr and his friends feel has usurped their revolution after only two years.

Badr thinks so, even if he shakes his head occasionally in disbelief that what he started in a casual conversation with friends a couple of months ago has swelled into a mammoth petition, backing nationwide rallies from this coming Sunday, that has the president and his allies seriously worried.

“I have no doubt, from what we saw during the signature campaign and our ability to gather millions of signatures from people in no time, that we will succeed,” the 28-year-old newspaper and television journalist told Reuters.

“People will protest on June 30 and eventually we will force Mursi to do what we want. It is just a matter of time.”

Mursi, for whom Sunday will mark his first anniversary in office, has dismissed efforts to unseat him as undemocratic – a view broadly echoed by others, from the head of the army to Islamist former militants and the U.S. ambassador in Cairo.

Badr sits with colleagues from their nearby campaign offices in Groppi. A Cairo landmark, the cafe has seen its share of cultural ferment and political intrigue since colonial days. But its faded charms speak of stagnation and disappointment under Mubarak, ills the Arab Spring uprising has failed to remedy.

Frustration that Mursi’s Muslim Brotherhood was not offering reform, and that established opposition parties were getting nowhere after failing to win a series of elections, drove Badr to propose what seemed at first a naive idea.

“Why don’t we just rebel?” he recalled saying to friends one Sunday. Three days later, on May 1, they launched their campaign “Tamarud – Rebel!” – both Arabic and English, but a single idea.

Paying for printing out of their own pockets, Badr, whose father is a rights activist, and his friends and acquaintances fanned out on street corners. They asked people to sign a petition of “no confidence” in Mursi, calling for new elections.

“We adopted the idea of peaceful rebellion,” Badr said. “Our tools are paper and pens.”

Soon they were the talk of Egypt. About 12,000 people volunteered to gather signatures. This week they say they have over 15 million, all duly registered with voters’ ID numbers. While hard to verify, this figure is two million more than elected Mursi a year ago.

“We made people feel fantasy could become reality,” said Walid al-Masry, 26, an unemployed computer science graduate who helped set up Tamarud. “And because we really love what we do, and we mean it, people believed us.”

Egyptians well remember how a call on social media to gather on January 25, 2011 ended with Mubarak’s overthrow 18 days later, adding credibility to Tamarud’s hopes of a new beginning:

“June 30 is not something new,” Badr said. “It is the continuation of the January 25 revolution, to get it back on track. “But this time, we won’t give up before we see change.”

Whether disappointment with Mursi can be channelled into a coherent, elected administration is unclear. Similar calls by youth protest movements in the past two years have fizzled out.

Mursi’s Islamist supporters are staging their own shows of strength and the army has warned both sides to back away from violence. Badr, whose movement has won organisational support from leftist and liberal parties, said: “We’re not looking for violence. We won’t allow it … We’re holding up a red card and blowing a whistle to tell Mursi to go. That is all.”

They propose no one else. The president could run again, said Badr. He himself voted for Mursi in the run-off last year rather than back Mubarak’s last prime minister, the other candidate. In the first round, he backed a moderate Islamist.

The plan come Sunday is to put millions on the streets across Egypt – and keep them there, with donated food and tents.

The group foresees an interim government of technocrats and a joint military-civilian council running Egypt until elections. Badr said he might run for president himself one day, noting he will have to wait by law until he turns 40: “And why not?

“We want a free Egypt, an Egypt for all Egyptians including the Islamists,” he said. “A democratic Egypt governed by law.”

These are sentiments that Groppi’s dusty chandeliers have heard many times before over the past century. Are not Badr and his friends afraid for themselves if their campaign fails?

“Even if the government jails us or kills us,” said Badr, soft brown eyes shining over the rim of his coffee cup, “the idea will not die and others will follow our path.

“We believe this land is worth fighting and dying for.”