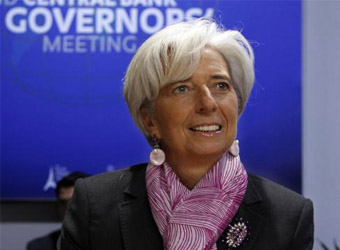 “The global economy may be on a path to recovery, but there is not a great deal of room for maneuver and no room for policy mistakes,” International Monetary Fund (IMF) Managing Director, Christine Lagarde, said in a speech in Beijing on Sunday.

In a separate talk on the same day, Lagarde said that China’s yuan could become a reserve currency in the future, adding that the country needed a roadmap for a stronger and more flexible exchange rate system.
She said signs of stabilization were emerging to show that policy actions taken in the wake of the global financial crisis were paying off, that U.S. economic indicators were looking a little more upbeat and that Europe had taken an important step forward in solving its crisis with the latest efforts on Greece.

“On the back of these collective efforts, the world economy has stepped back from the brink and we have cause to be more optimistic. Still, optimism must not lull us into a false sense of security. There are still major economic and financial vulnerabilities we must confront,” Lagarde said.

The IMF chief cited still fragile financial systems burdened by high public and private debt persist advanced economies as the first of three major risks and said euro zone public sector and bank rollover funding needs in 2012 were equivalent total about 23 percent of GDP.”Second, the rising price of oil is becoming a threat to global growth. And, third, there is a growing risk that activity in emerging economies will slow over the medium term,” she said.
Lagarde also said youth unemployment should be tackled and that all countries must persevere with their policy efforts if the progress made in stabilizing the global economy is to pay off with better prospects ahead.
She said advanced economies must continue with macroeconomic support and a balanced fiscal policy, together with financial sector reforms and structural and institutional reforms to repair the damage done by the crisis and to improve competitiveness.

Meanwhile emerging market economies need to calibrate macroeconomic policies both to guard against fallout from the advanced economies as well as to keep overheating pressures in check, Reuters reported.

“What is needed is a roadmap with a stronger and more flexible exchange rate, more effective liquidity and monetary management, with higher quality supervision and regulation, with a more well-developed financial market, with flexible deposit and lending rates, and finally with the opening up of the capital account,” she told a gathering of leading Chinese policymakers and global business leaders.

“If all that happens, there is no reason why the renminbi will not reach the status of a reserve currency occupying a position on par with China’s economic status.”

Renminbi is another name for the yuan.

Lagarde said China had showed leadership and adept policy skills when the global financial crisis exploded and which might have been worse but for the impetus it provided to growth and stability.
China unveiled a massive 4 trillion yuan ($635 billion) stimulus package for its economy at the end of 2008 as the financial crisis reverberated around the world and global trade — which China’s massive factory sector depends on for growth and jobs — shuddered to a standstill.

The IMF chief said it was crucial that the world’s major economies were working together with the same objective.
“We are all interconnected and we are all affected by each other’s policy actions. We need to prepare for success together. If we stand together, the whole will be more than the sum of the parts,” Lagarde said.