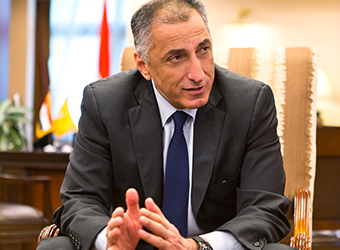 The International Monetary Fund (IMF) agreement to release the second tranche of a 12-billion US dollar loan to Egypt, is a “vote of confidence” in the country’s economic reform programme, Governor of the Central Bank of Egypt (CBE) Tarek Amer said Saturday.

The IMF approved a 12-billion dollar, three-year loan programme to Egypt in November and has already paid out 2.75 billion dollars as the first tranche of the loan. The second tranche, 1.25 billion dollars, must still be endorsed by the IMF board following an “expert-level agreement” announced in an IMF statement on Friday.

“That move will lead to the increase of the flow of foreign and international investments into Egypt, which will help boost the development process,” Amer was quoted by official news agency MENA as saying.

He hailed Friday’s IMF statement as “important and confirms that Egypt is on the right track and will help attract foreign investments.”

He attributed the IMF release of the second tranche for “adopting good financial and monetary policies and following scientific and practical measures that secure the nation against shocks.” This agreement is “a vote of confidence” by the IMF staff in the continued implementation of the Egyptian authorities’ programme on economic reform, the IMF statement said.

“The Egyptian Ministry of Finance has drafted a very strong budget. If enacted by Parliament, it will place public debt on a clearly declining path to sustainable levels,” the statement added.

Social protection measures are an essential counterpart to the economic reform effort, and they will protect the most vulnerable people in Egypt while the reform effort is underway, it said.

This agreement showed confidence by the IMF staff in the continued implementation of the Egyptian authorities’ program. It is also testimony to the great efforts the Government and the CBE have been making to reform the economy, it added.

According to Egypt’s finance minister, Amr el-Garhy, the second tranche of the IMF loan should be disbursed in the second half of June. The Egyptian economy has been battling to recover after experiencing recession due to political turmoil that led to the ouster of two presidents.

Since the 2011 revolt that toppled Hosni Mubarak, the Arab world’s most populous country has seen a sharp decline in tourism revenue and reduced foreign investment, caused by political instability and security issues. To obtain the IMF loan, Cairo adopted austerity measures to implement needed reforms by applying value added tax, cutting public energy subsidies and liberating the exchange rate of the Egyptian pound.

The foreign currency reserves reached 28.52 billion US dollars in March, the highest ever since March 2011, when it was estimated at 36 billion dollars. To pave the road for luring investments, the Egyptian government over the past three years has been working on establishing mega national projects including the Suez Canal development corridor, new capital along with expansion of the infrastructure.

The delegation from the IMF arrived in Cairo on April 30 to follow up on the progress in the country’s economic reform program, ahead of delivering the second tranche of the loan. The visit lasted until Thursday covered meetings with officials from the CBE and the finance ministry to discuss plans for the second phase of the country reform programme and the 2017-2018 state budget and the structural reforms adopted by the government.