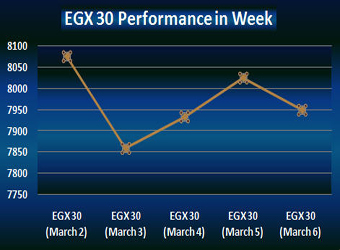 During last week, Egypt has witnessed the formation of a new government led by Ibrahim Mehleb in which 20 ministers from ex-Prime Minister Hazem El-Beblawi retained their positions in the new Cabinet, Ministers of Defence Field Marshal Abdel Fattah al-Sisi and of Interior Major General Mohamed Ibrahim.

In addition, the country also saw last week the strongest signal that Army Chief al-sisi would run for president, saying he cannot ignore the demands of the “majority”.

“I cannot turn my back when the majority wants me to run for president,” El-Sisi said in a speech at a graduation ceremony at the Cairo war college last Tuesday.

He told journalists “official procedures” regarding his candidacy were expected in the coming days.

Going back to the indices’ activities during the week, the Egyptian Exchange’s benchmark index EGX 30 index fell by 2.2% in a week, registering a decline of 178.44 points, ending Thursday’s transactions at 7949 points compared to 8127.44 points at the end of a week earlier.

The main gauge index registered its highest point on Sunday closing at 8075.59 points, where its lowest point recorded on Monday at 7859.29 points following a massive losses of EGP 9.5 billion.

Furthermore, the market capitalization closed at EGP 488.677 billion last Thursday, compared to EGP 491.847 billion at the end of a week earlier.

Telecommunications was the most active sector through last week, recording a volume of trades of 466 million securities worth EGP 754 million.

Travel & Leisure sector reported third, with a volume of trades of 191 million securities worth EGP 440 million.

Real Estate was on the fourth position, getting a volume of trades of 160 million securities worth EGP 702 million.

Industrial Goods and Services and Automobiles reported sixth, having a volume of trades of 91 million securities worth EGP 175 million.

Construction and Materials was on the seventh position, with a volume of trades of 45 million securities worth EGP 192 million.

Food and Beverage reported eighth, attaining a volume of trades of 24 million securities worth EGP 159 million.

Banks was on the ninth position, with a volume of trades of 10.4 million securities worth EGP 241 million.

Healthcare and Pharmaceuticals came eleventh, attaining a volume of trades of 5 million securities worth EGP 21 million.

At the bottom of the list, Chemicals reported twelfth getting a volume of trades of 4.4 million securities worth EGP 62 million.

Local investors led the market activity all through the week with 88.87%, followed by Foreign and Arab investors with 4.52% and  6.61%, respectively.

Foreign investors were the most active buyers during the week earning the value of EGP 81.44 million , after excluding the deals.

Arab investors were also to buy by value of EGP 95.31 million, after excluding the deals.

Moreover, institutions seized 33.49% of total trading through the week; while individuals attained 66.51% . Institutions were the most active sellers during the week earning the value of EGP 167.67 million, after excluding the deals.

Russell indexes said in a press release on Monday it has reclassified the Egyptian equity market category from an emerging market to frontier statues.

Russell indexes the global asset manager and has USD 4.1 trillion in assets benchmarked to its index.

This conclusion by Russell Indexes results from a three-year market risk review process, as prescribed by Russell’s index methodology, in which Egypt did not meet macro- and operational risk criteria for emerging market status, but did meet classification for inclusion in frontier markets.

Russell Index country classifications are announced each year in March and any changes become effective at the conclusion of the annual index reconstitution process in late June.

Mat Lystra, Russell senior index research analyst, said “Egypt’s political risk has risen steadily since the 2011 revolution and, in order to manage the availability of foreign currency reserves in short supply since the Arab Spring, the country has enacted currency controls, creating a major barrier to efficient trading in the market. Having a clear road map to follow and the global resources to carry out extensive, objective evaluation gives us confidence that Egypt has been accurately evaluated against the same risk and efficiency criteria among all countries in our family of global indexes.”

The reclassification would oblige investment funds tracking Russell’s emerging market index to sell their Egyptian equity holding. However, those who track the Frontier index would still be able to invest in the country.

On Wednesday, Egypt’s financial regulator, as part of a broader effort to invigorate the country’s financial markets, has lifted a ban on brokerage firms and fund managers trading shares listed overseas.

The markets’ watchdog introduced the ban in June 2012, saying such deals exposed investors to risks it could not monitor. Traders at the time said the restriction could be aimed at limiting transfers of hard currency abroad.

Egypt’s foreign reserves have shrunk significantly since the 2011 uprising that swept long-time ruler Hosni Mubarak from power. Reserves stood at $17.307 billion in February, down from around $35 billion before 2011.

Much of the activity in Egypt’s capital markets dried up during the political instability that followed the toppling of Mubarak although the stock market has since rebounded.

The new rules, effective immediately, allow brokerages and fund managers in Egypt to trade foreign shares on behalf of non-Egyptian investors who do not reside in the country and who use financing from abroad, said Sherif Samy, chairman of the Egyptian Financial Supervisory Authority (EFSA).

Egyptian firms remain banned from trading stocks that are not listed in Egypt on behalf of local investors or on their own accounts, Samy added in a telephone conversation with Reuters on Wednesday.

The rules do however allow brokerages to trade global depository receipts (GDRs) listed on stock exchanges abroad on behalf of local investors.

The change is aimed at allowing Egyptian financial institutions to serve foreign clients by executing transactions in markets in the region such as Saudi Arabia, the United Arab Emirates, Jordan and Bahrain, Samy said.

“Companies wishing to trade foreign shares that are not listed on Egypt’s bourse will commit to obtaining prior approval from (EFSA),” Samy said.

Brokerage firms welcomed the decision, which should enable them to boost revenues.

“This decision is 100 percent right,” said Mohamed Ebeid, co-head of securities brokerage at EFG Hermes, one of the Middle East’s largest investment banks.

“The decision will return Egyptian brokerage firms to work within the whole region once again.”

TUI Deutschland GmbH Plans to Boost its Investments in Egypt