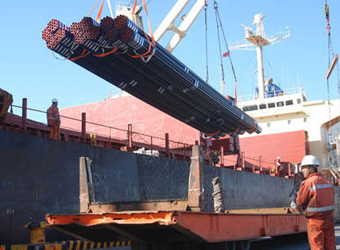 Prices of iron per tonnes decreased to 300 Egyptian pounds  from 400 pounds due to decreasing international prices of pallet by about $50 per ton, according to Head of the Building Materials Division at the Cairo Chamber of Commerce Ahmed el-Zeiny.

The division revealed that iron prices will decline further during the month of Ramadan, due to the decline in raw material prices and the recession because of the higher prices.

He said that imports operations stopped after stating anti-dumping duties on imported iron from China, Turkey and Ukraine.

In 2017, the Trade Ministry put tariffs on steel rebar from China, Turkey, and Ukraine for five years.

The tariff was first implemented in June to protect local manufacturers and was set at 17 percent for Chinese steel, 10-19 percent for Turkish steel, and 15-27 percent for Ukrainian steel.

Zeiny attributed the decline of prices during that latest period to the start of the operations of 70 percent of the production capacity of Al-Arish Cement Company, which prompted foreign producing companies to reduce their prices.

Zeiny added that the new Beni Suef plant started experimental production on Saturday, pointing out that by the beginning of next month the plant will produce 40,000 tons per day, which will further reduce the prices during the coming period due to the rise of supply.

Turkey says not siding with anyone on Syria, policy different from Iran, Russia, U.S.

SUD to market 1,000 units in Capital Heights 2 in Egypt’s new capital this year