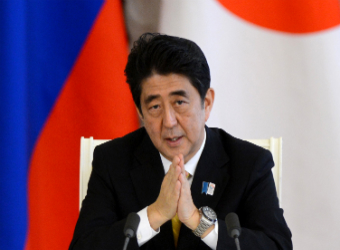 Japanese Prime Minister Shinzo Abe is considering calling a snap election as early as next month to take advantage of an uptick in approval ratings and disarray in the main opposition party, domestic media reported on Sunday.

Abe’s ratings have recovered to the 50 percent level in some polls, helped by public jitters over North Korea’s missile and nuclear tests and chaos in the opposition Democratic Party, struggling with single-digit support and defections.

Abe told the head of his Liberal Democratic Party’s junior coalition partner, the Komeito party, that he could not rule out dissolving parliament’s lower house for a snap poll after the legislature convenes for an extra session from Sept. 28, public broadcaster NHK reported, citing unidentified informed sources.

“Until now, it appeared the election would be next autumn, but … we must always be ready for battle,” media quoted Komeito party chief Natsuo Yamaguchi as telling reporters on Saturday during a visit to Russia.

Speculation has mounted over a snap election on October 22, when three by-elections are scheduled, although other possibilities are later in October or after U.S. President Donald Trump makes a likely visit in early November, media said.

Abe’s ratings had sunk below 30 percent in some surveys in July, battered by suspected cronyism scandals and a perception that he had grown arrogant after more than four years in office.

His popularity rebounded a bit after an early August cabinet reshuffle and has since been helped by worries over a volatile North Korea, which on Friday fired a ballistic missile over Japan, its second such move in less than a month.

“If we have a snap election now, we need to explain it to the public, including how we will cope with the threat from North Korea,” said Koichi Hagiuda, a senior LDP executive, according to NHK.

As Japan faces its first impending major security crisis since World War II, it is vital to secure public understanding, he said.

No general election need be held until late 2018, and calling a snap poll could spark criticism that he was creating a political vacuum amid rising regional security tensions.

But an early vote would not only take advantage of Democratic Party disarray but also dilute a challenge from an embryonic party that allies of popular Tokyo Governor Yuriko Koike, an ex-LDP lawmaker, are trying to form.

Abe’s coalition would likely lose its two-thirds ”super“ majority” in the lower house, but keep a simple majority, political sources have said.

Loss of the two-thirds grip would dim prospects Abe can achieve his controversial goal of revising Japan’s pacifist constitution to clarify the military’s role. Any constitutional amendment requires approval by two-thirds of both chambers and a majority in a public referendum.

That risk could make Abe hesitate.

“I am skeptical about the consensus that Abe will call a snap election because doing so poses a risk, albeit small, to his agenda of constitutional revision,” said Jeffrey Kingston, director of Asian studies at Temple University Japan.

Philippines’ Duterte asks head of human rights agency: ‘Are you a pedophile?’