Entertainment
By Yomna Yasser On Mar 2, 2014 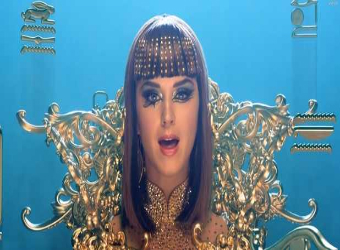 The video for pop star Katy Perry’s new single Dark Horse has been edited after criticisms that it was offensive to Muslims.

The video, officially released on 20 February, has had over 47 million views on YouTube so far. The video deploys a cartoonish pharaonic theme which sees the popstar posing as an Egyptian queen.

In one scene, a suitor wearing a pendant with the Arabic word for God on it is struck by lightning and turned to sand.

The video has now been altered to obscure the word Allah from the pendant.

No official statement has been issued by Perry or by the production company Capitol Records regarding the editing of the video.

An online petition demanding the video’s removal had been gathering steam before the edits were made.

The organiser of the petition, Shazad Iqbal from the United Kingdom, accused the videomakers of blasphemy.

“Blasphemy is clearly conveyed in the video, since Katy Perry (who appears to be representing an opposition of God) engulfs the believer and the word God in flames,” he said, adding that “using the name of God in an irrelevant and distasteful manner would be considered inappropriate by any religion.”

The petition has more than 65,000 signatures from around the world. Some of the petitioners point ironically to a past tweet in 2010 by Perry that reads “using blasphemy as entertainment is as cheap as a comedian telling a fart joke.”

“All I was trying to do is just give a very beautiful performance about a place that I have so much love for,” Perry told GQ magazine about the video recently, “and that was exactly where I was coming from, with no other thought besides it.”

Some of the petitioners, however, insist that Perry’s intention was to offend. “[I am] absolutely disgusted at the music industry for allowing this to happen, music should be about spreading love not hate,” commented Bilal Khan on the petition site.

Another supporter of the petition, Sadaqat Ali, comments: “This is highly insulting and is provocative and needs action.”

Other online reactions have criticised the petitioners.

One commenter on the petition site, Nick Brooks, writes with apparent sarcasm: “This has definitely been done deliberately, there’s no way this could be a simple oversight by the person doing the costumes for this video. It cannot possibly be the case that this person just picked out the necklace because it looked nice for the video. This person will of course be an expert on what the name of Allah looks like in Arabic – this is basic training for people who select jewellery for use in pop music videos.”

This is not the first time Perry has come under fire for the way she uses symbols of other cultures in her work. Her Japanese-themed performance of her song Unconditionally at the American Music Awards in November, in which she dressed as a geisha, saw her criticised for misappropriating Japanese culture.

Gold prices in Egypt on August 8