Kerry in Cairo: Egypt Aid Suspension ‘Not a Punishment’ 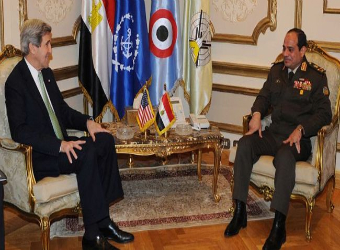 Secretary of State John F. Kerry said here Sunday that the suspension of some U.S. assistance to Egypt “is not a punishment” and that aid was “a very small issue between us” compared with the many interests the two countries share.

Kerry, who made an unannounced stop in Cairo at the beginning of an 11-day trip through the Middle East and North Africa, is the most senior U.S. official to visit since the Egyptian military ousted elected President Mohamed Morsi in the summer. Morsi is scheduled to go on trial Monday.

In public comments surrounding meetings with Gen. Abdel Fatah al-Sissi and the leaders of an interim military-appointed civilian government, Kerry sought to balance the long-term U.S. commitment to Egypt with what he described as temporary concerns about human and civil rights and the promised return to full civilian rule under an elected government.

“Our hope is that we can make the progress” needed to restore all elements of a $1.3 billion annual military assistance program, “and then we will march together hand in hand into the future with Egypt playing the vital role it has played traditionally” in the Arab world, Kerry said at a news conference with interim Foreign Minister Nabil Fahmy.

Fahmy, who last month described U.S.-Egyptian relations as being in a “turbulent” state, was equally effusive in his praise for strong bilateral ties. But he emphasized that Egypt would act “based on our own priorities.”

The July 3 overthrow of Morsi’s Muslim Brotherhood-led government put the administration in the uncomfortable position of disapproving the undemocratic action but reluctant to undermine ties with a key Arab partner. U.S. relations with Morsi had been stormy, and the administration has pushed for a quick military retreat back to the barracks and a return to full civilian rule.

Egypt’s military and interim government have made progress on implementing a road map in that direction. But in the months since the coup, Egyptian security forces have led the harshest crackdown on political opponents in decades , throwing thousands behind bars and shooting hundreds of anti-coup protesters in the streets.

More recently, the state has begun to go after secular politicians and activists who had backed the coup but have grown critical.

A senior State Department official traveling with Kerry said the issue of Morsi’s trial on murder charges was not raised in his talks with Sissi or Adly Mansour, the interim president. But Kerry pressed both to be more “inclusive” of those who disagree with them and said “there should be an outreach” to members of the Muslim Brotherhood and others not involved in violence, said the official, who spoke on the condition of anonymity to describe the closed-door talks.

Kerry also urged them not to extend a military-declared state of emergency due to expire Nov. 14 and stick to plans for a new constitution — due in draft form by Dec. 3 — and early parliamentary and presidential elections.

Sissi, the official said, asked the United States for “patience” while the government navigates the current upheaval.

Although the administration declined to declare that a military coup had taken place in Egypt, it has been bound by a U.S. law that prohibits providing funds to governments that come to power through the use of force. Shipments of big-ticket military items — including F-16 fighter planes, M1 Abrams tanks and Apache helicopters — have been suspended, but spare parts have been provided and training has continued, along with separate expenditures for nonmilitary assistance.

Those items have been paid for with existing funds, but the money is about to run out, and the administration is negotiating with Congress for a waiver to keep military and civilian assistance programs to Egypt running.

Obama administration arguments would be enhanced if Kerry could persuade military leaders here to temper some of the more extreme crackdowns and undertake economic reforms that Morsi was unable to implement. But the military has proved far more resistent than Morsi, whose trial venue was moved Sunday to the same police academy where long-time president Hosni Mubarak was tried.

In addition to meeting government and military leaders, Kerry sat down with representatives from a cross-section of faith-based, human rights, youth and labor groups to discuss political and economic reform.

“It is no secret that this has been a difficult time and these have been a turbulent couple of years,” Kerry said at the news conference. The Egyptian upheaval began in early 2011 with the U.S.-backed removal of Mubarak after weeks of massive popular protests.

But, Kerry said, “We are committed to work with, and we will continue our cooperation with the interim government.”

Powerful Persian Gulf countries that were wary of the Muslim Brotherhood’s rise welcomed Morsi’s ouster and have been angered by even the relatively mild U.S. criticism of the Egyptian military takeover. The amount of aid withheld by the United States pales beside the $12 billion that Saudi Arabia, the United Arab Emirates and Kuwait have contributed to Egypt since the coup.

Officials from those countries have generally criticized U.S. policy in the region, including the administration’s reluctance to become directly involved in Syria’s civil war and the attempted rapprochement with Iran.

Kerry took strong exception Sunday toreports of that criticism , which he said were “without any foundation whatever to the fact of what is actually happening in relations” between the United States and regional partners.

“We can have a difference on a policy [or] on the tactics of a policy. For instance, some countries in the region that wanted the United States to do one thing with respect to Syria, and we have done something else,” Kerry said. But, “We all share the same goal . . . the salvation of the state of Syria and the transition government put in place . . . that can give the people of Syria the opportunity to choose their future,” as well as leading efforts to achieve a non-nuclear Iran and a just and lasting Israeli-Palestinian peace.

Kerry was scheduled to arrive late Sunday in Riyadh for a meeting the next day with Saudi King Abdullah.