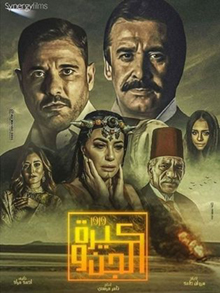 Kira Wal Gin’s director is Marwan Hamed, which celebrated the special screening of the film in a major cinema in Sheikh Zayed City on Sunday.

Kira Wal Gin is inspired by the novel “1919” written by Ahmed Murad. The film is a story of an Egyptian resistance fighters’ group against the British occupation at the time of the 1919 revolution to 1924. This group also fought battles and made sacrifices for independence.

Henry Sabry anticipates the movie will achieve the highest revenues in the history of cinema in Egypt. Hend also commented on the film achieving revenues of LE12 million in in three days.

“In all cases, this is the highest revenue in the history of Egyptian cinema.” Sabry posted on her personal Instagram account.