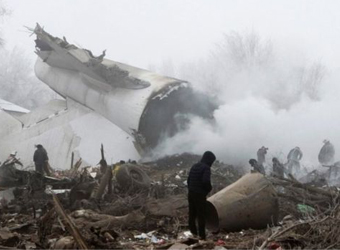 A Turkish cargo plane flying from Hong Kong has crashed in Kyrgyzstan, killing at least 37 people, most of them on the ground, officials say.

The Boeing 747 TC-MCL aircraft operated by ACT Airlines crashed as it landed in fog at Manas airport, 25km (15 miles) north of the capital, Bishkek.

At least 15 buildings were destroyed in a village outside the airport, with a number of children among the dead.

Flight TK6491 was to have stopped at Manas en route to Istanbul in Turkey.

ACT is an Istanbul-based airline operating under the name MyCargo. The plane is believed to have been around 14 years old.

Deputy PM Muhammetkaly Abulgaziev said on state TV: “According to preliminary information, the plane crashed due to a pilot error.”

One witness, Baktygul Kurbatova, told local media: “I woke up because of a bright red light outside. I couldn’t understand what was happening.

“It turns out the ceiling and the walls were crashing on us. I was so scared but I managed to cover my son’s face with my hands so that debris would not fall on him.”