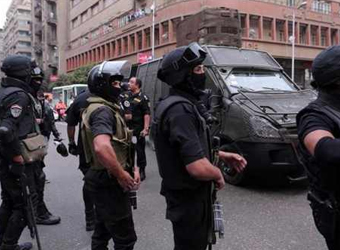 Egypt’s interior ministry said it has killed a leading figure in the terrorist group Ansar Beit Al-Maqdis in a raid on a house in North Sinai, in a statement on the ministry’s Facebook page on Sunday.

The ministry said police received information on the location of Hamdan Hussein, born in 1978 in North Sinai, who resided in Al-Arish City.

The tip, according to the ministry, revealed that Hussein was responsible for planting a number of roadside bombs that targeted security vehicles and leading an attack last week on a security checkpoint in front of Al-Arish’s general hospital that killed a policeman.

Once police received permission from the state security prosecutor to raid Hussein’s house, they attempted to arrest him at his home.

According to the ministry’s statement, Hussein opened fire on police, prompting them to shoot and kill him.

An automatic rifle and bullets were found in his possession.

Ansar Beit Al-Maqdis has claimed responsibility for the majority of attacks against security personnel and installations in the restive North Sinai.

Egypt’s army and police forces have been waging a war over the past three years against an Islamist militant insurgency in North Sinai that has seen hundreds of security personnel killed, as well as hundreds of terrorists killed in security offensives.