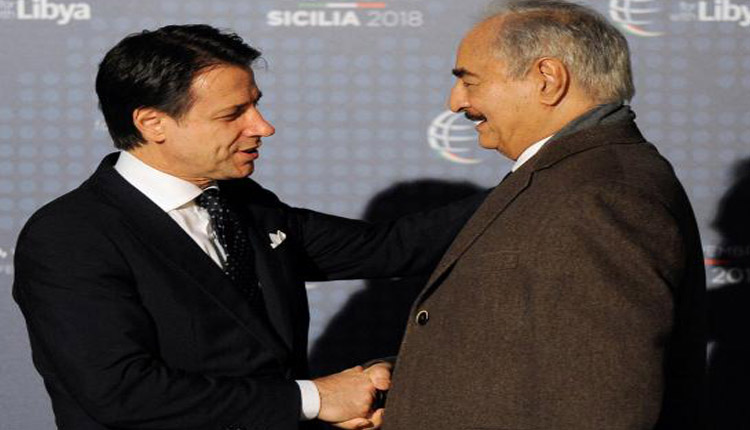 The rulers of Libya’s rival east and west were gathering at a summit for the first time in more than five months on Monday, a week after the United Nations buried plans to hold an election next month.

Libya’s prime minister Fayez al-Serraj, who is based in the west and has limited authority, arrived earlier on Monday.

Italy hopes the conference will resurrect U.N. efforts to stage elections in Libya, after the United Nations announced last week that the OPEC member country could not hold a planned election on Dec. 10 because of violence and stalled talks.

Khalifa Haftar, the strongman ruling most of Libya’s east, arrived in the evening in the Italian city of Palermo for a two-day summit to discuss a U.N. peace plan to stabilize the North African country, in turmoil since 2011.

The summit will assemble Libya’s main rivals for the first time since a similar event in Paris in May, where they had agreed to the plan to hold the December election.

It was not clear whether the Libyan participants would actually meet directly. Italian Prime Minister Giuseppe Conte will hold some bilateral meetings including with Haftar late on Monday, an official said.

Serraj’s western-based government is internationally recognized but has struggled to assert its authority in a country still mostly controlled by armed groups, eight years after NATO-backed rebels toppled former dictator Muammar Gaddafi in 2011.

A rival government is based in the east, where most towns and cities are under the control of Haftar.

Apart from Haftar, the heads of the two parliaments based in the east and west, Aguila Saleh and Khalid al-Mishri, were also attending, officials said.

Italy, the former colonial power, has vast oil and gas interests in Libya and has been trying to shut down people-smuggling from the Libyan coast.

It has been eager to host a high-profile event, competing with France which staged the May conference.

U.N. Libya envoy Ghassan Salame told Reuters he hoped another attempt to hold an election will take place by June but Libyans should first hold a national conference in early 2019 to decide on the poll’s format.

“We want to ask at the national conference what type of election do you want: parliamentary or presidential, and what kind of law,” Salame said.

The envoy said the national conference should “preferably” take place on Libyan soil. Surveys had shown that 80 percent of Libyans want elections to end the stalemate between Libya’s rival administrations.

He hoped the Palermo conference would put pressure on the internationally recognized parliament, the House of Representatives (HOR), which has failed to pass an election law.

“The HOR has been sterile, has produced no law … I think we need wider representation of the Libyans,” he said.

France has been courting Haftar, who is supported by Egypt and the United Arab Emirates, which see his forces as a bulwark against Islamists.

Italy is the main backer of Serraj and his weak Government of National Accord (GNA), and has worked with local groups in Libya to stop Europe-bound migrants from embarking by boat.