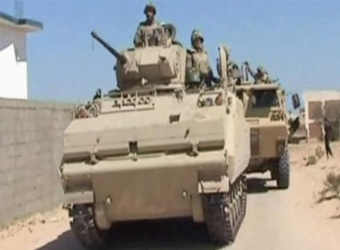 A group of anonymous militants kidnapped early on Thursday seven Egyptian security officers in the lawless Sinai Peninsula, near the borders with Israel, security and Bedouin sources said.

According to the sources three policemen and four army officers who were riding in taxis travelling from Arish to Rafah cities, both in North Sinai, were stopped by militants and kidnapped. It was not yet clear who was behind the operation or their motives or demands.

Egypt’s government has been trying re-establish state authority that collapsed in Sinai following the 2011 uprising against President Hosni Mubarak. Hardline Islamist groups based mostly in North Sinai have exploited the vacuum to launch attacks both across the border into Israel and on Egyptian targets.

In August last year, 16 Egyptian border guards were killed in an attack blamed on Islamists who then hijacked an armored vehicle that they smashed across the border into Israel, where they were killed by Israeli forces.