Morsi Supporters Fired First at Rabaa, But Police Response ‘out of Proportion’: NCHR 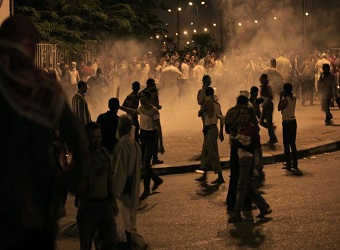 Egypt’s government-appointed human rights organisation has announced its findings of a six-month investigation into last August’s bloody dispersal of the Rabaa Al-Adaweya sit-in, concluding that while supporters of ousted Islamist president Mohamed Morsi fired first, security forces on the scene responded with excessive force, “firing out of proportion” and leaving over 600 dead.

The National Council for Human Rights (NCHR) presented the report at a press conference in Cairo Wednesday, where Nasser Amin, a human rights lawyer and a member of the council’s fact-finding committee, offered what he said was a detailed account of events on 14 August, when security forces dispersed the pro-Morsi camp in the Cairo district of Nasr City.

According to the council’s report, police were present at the sit-in at roughly 6am. Warning shots were fired around 7:20am to inform protesters of peaceful exits and warning them not to attack the police.

Amin pointed out that the interior ministry did not provide the council a copy of its dispersal plan for 14 August and that the fact-finding committee had to reach its own conclusions.

The clashes first began at 8:10am, with police firing teargas and protesters hurling stones and Molotov cocktails, Amin said.

Around 11am the first gunshot was fired on Al-Tayaran Street, by the Republic Guard headquarters, killing a police officer who had been calling on protesters to leave via a secure and safe exit.

“The scene dramatically changed after that, and gunshots were excessively fired from all sides,” said Amin.

Between 1 and 2:30pm was what Amin described as a cease fire, during which pro-Morsi groups tried to enter the sit-in. They were barred from entering by security forces, who by then had managed to again clear the safe exits.

“The presence of armed groups was dangerous because it made civilians a target as well,” said Amin. Behind him, the video footage showed protesters hiding from gunshots.

The report accused “extremist members” from the protest camp of using civilians as human shields, which led to deaths and injuries.

No video footage of the police in action during the dispersal was screened at the press conference on Wednesday.

When members of the audience pointed this out and criticised the council, Amin responded that the footage of the Islamist protesters was the “only footage they could find.”

Another video that Amin screened was one of Muslim Brotherhood leader Mohamed El-Beltagy.

The footage showed El-Beltagy speaking on the stage in Rabaa Al-Adaweya, reportedly during the midday cease fire, when he announced that over 300 people had been killed.

Amin referred to this footage as a “very important testimony” regarding the commission’s body count from the dispersal because the day’s “most aggressive battle” occurred before the cease fire.

The battle after the cease fire lasted only an hour, he said.

According to the report, 632 were killed in the dispersal, all of them civilians with the exception of eight police officers.

‘Firing out of proportion’

Although the report levelled blame at the Islamist camp for initiating the day’s violence, it did also offer up criticism of Egypt’s interior ministry for several shortcomings.

First, security forces should have given such a large number of protesters more than only 25 minutes to evacuate the sit-in, the report said.

Furthermore, the interior ministry should have better secured the safe path allocated for peaceful protesters who wished to leave.

The report stressed that the ministry should have expected clashes to take place along the exit route and thus planned accordingly.

Amin said that while use of armed weapons by police was justified, given the circumstances, nevertheless “the police failed in restraining themselves by firing out of proportion.”

The wounded were also deprived of aid, said Amin, as ambulances could not enter the camp amid ongoing clashes that left an ambulance driver dead after a random shooting.

Amin explained that while other violations were committed during the sit-in or at the time of its dispersal, the council was only concerned with the most major events.

He added that army troops stationed near the camp that day were only there to secure the neighbourhood and played no role in the dispersal.

Commenting on the NCHR report hours after the press conference, assistant interior minister for media affairs Major General Abdel-Fattah Osman told MBC Misr that he thought it was “objective in assessing the dispersal of the Rabaa sit-in.”

Osman also welcomed the investigation of any violations by security forces and the police as suggested by the report.

Violence during Rabaa and beyond

According to Amin, the council acknowledges that the pro-Morsi sit-in began as a peaceful assembly. However, sometime between 28 June and 14 August – the report failed to clearly identify the exact date – those in charge of the sit-in allowed armed groups to enter the camp without notifying the rest of the protesters.

The report further revealed that at least 11 bodies sent to forensic authorities from the camp showed signs that the Egyptians had been tortured to death, allegedly by supporters of the deposed president on 13 August, the day before the dispersal.

Six of these bodies were found in Rabaa Al-Adaweya, three at another pro-Morsi camp in Giza’s Nahda Square and three others in a dumpster in the Giza district of Al-Omraniya.

Amin said that the men had been tortured on suspicion of being police infiltrators.

He added that several citizens had been subjected to “arbitrary arrests” by pro-Morsi protesters.

The report also stated that the main stage at the Rabaa Al-Adaweya sit-in was a podium for inciting violence, killing, hatred and the attacking of state symbols and public institutes.

The protest lasted for nearly 47 days, prompting citizens to file reports with public prosecutors, who then ordered for the sit-in to be dispersed, according to the report. Officials at the time had given the protesters 46 days to negotiate with Egypt’s interim government.

The dispersal of the pro-Morsi camp was followed by nationwide violence that the report said reached 22 Egyptian governorates, with attacks on police stations and churches that left 686 left dead, including 64 members of the police.

A final recommendation from the report suggested an independent investigation regarding the sit-in, its dispersal and the violence that followed, as well as trials for those involved and compensation for victims proved to not have been involved in the violence.

The NCHR also demanded that police undergo training to better deal with riots and their dispersals.

The full report will be released on 16 March, according to NCHR head Mohamed Fayek.

The document will cover the Rabaa and Nahda camps, as well as events immediately following the dispersals, including attacks on churches, the death of 37 pro-Morsi detainees in a police truck outside of Abu Zaabal prison and the attacks on police stations in the Giza town of Kerdasa.

Riyad has said that disclosing the final report to the public will be the president’s decision.