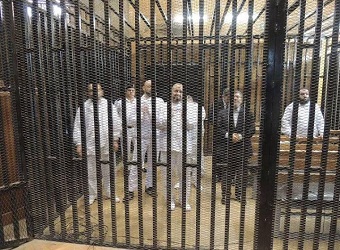 An Egyptian court decided Saturday to postpone until February 24 the trial of ousted Islamist president Mohamed Morsi and 130 others over jailbreak charges, the Egyptian state TV reported.

Morsi and 130 co-defendants are accused of storming Wady al- Natroun Prison and kidnapping and killing police officers during the 2011 uprising that toppled president Hosni Mubarak.

The defendants include leading Muslim Brotherhood figures and members of the Palestinian Hamas movement that rules Gaza and the Lebanese Shiite militant group Hezbollah.

More than 20,000 prisoners escaped in 2011 and investigations revealed that contacts were made among the ousted president, Brotherhood leaders, and Hamas and Hezbollah members to spread chaos, storm prisons and train militants in Egypt.

Ousted by the military last July, Morsi is facing other separate lawsuits over charges of espionage, inciting killing of protesters and insulting the judiciary.

Islamists have been staging regular protests condemning Morsi’s ouster as a “coup” and demanding his reinstatement. They confronted a heavy security crackdown that left about 1,000 killed and thousands arrested.

The Muslim Brotherhood, from which Morsi hails, was also blacklisted by the interim government last December as a ” terrorist group.”