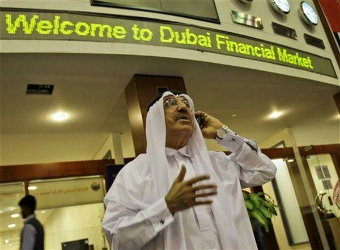 Stock markets in the Middle East most exposed to foreign fund flows followed global shares lower Thursday, while Saudi Arabia’s index, dominated by local investors, outperformed the region for the day and the week.

In Qatar, nine of the 11 MSCI emerging market index shares were down, with Commercial Bank declining 1.0 percent.

Egypt’s index dropped 0.9 percent in thin trade as Talaat Mostafa Group – which is currently part of the MSCI emerging market index but will be removed on June 1 – lost 2.8 percent. The largest Egyptian stock in the index, Commercial International Bank, fell 0.9 percent.

Saudi Arabia’s index, lost 0.1 percent with trading volume shrinking by a little over a half from the previous session. Forty shares rose, 106 declined. However, the index outperformed Gulf peers for the week with a 0.8 percent gain.

U.S. President Donald Trump is due to visit Saudi Arabia in coming days and some investors hope deals could be signed between Saudi and American companies in the mining, energy, auto and defence sectors. Most announcements from the meeting, though, are expected to be about previously revealed deals or memorandums of understanding rather than concrete new projects.

Combined net profits of listed Saudi Arabian companies grew 37 percent from a year earlier in the first quarter, but that was almost entirely due to petrochemical firms, which benefited from higher oil and product prices.

The market’s valuation has risen to 14.6 times forward earnings from 11.3 times in the first quarter of 2016.

“The market is now trading at a premium to most other regional markets and we believe petrochemicals are now fully valued. The banking sector offers some value, as it is trading slightly below fair value.”

The total net profit of Qatari companies was flat in the first quarter compared to a year ago but valuations have expanded, making the fundamental picture for that market less attractive.

“UAE markets are fundamentally stronger than others but the recent very low volumes are keeping funds away – there is simply no appetite for massive allocations,” said a Dubai-based trader.