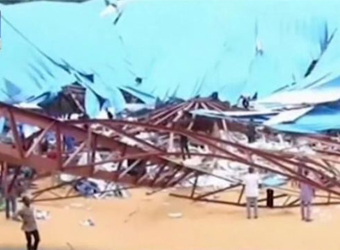 At least 60 bodies have been recovered from a church that collapsed in the south-eastern Nigerian city of Uyo.

Some reports put the number much higher. The roof of the church caved in on worshippers who had gathered for the ordination of a bishop.

The church was still under construction and workers had rushed to complete it for the ordination, witnesses said.

Mr Emmanuel said there would be an investigation into whether safety standards had been compromised.

The city’s mortuaries are overflowing, hospital sources say. Etete Peters of the University of Uyo Teaching Hospital told the AP news agency that at least 160 people had been killed.

President Muhammadu Buhari has expressed “deep sorrow” over the incident.

An unnamed survivor quoted by Nigeria’s Channels TV said: “Suddenly, the roof fell on worshippers. The governor was quickly rescued. But others were not that lucky.”

Building collapses are relatively common in Nigeria, mainly due to the use of sub-standard materials and the violation of building regulations.

In 2014, scores of people were killed when a church hostel belonging to a Nigerian TV evangelist collapsed in the city of Lagos.