Obama leaves Democratic Party skeleton of its former self 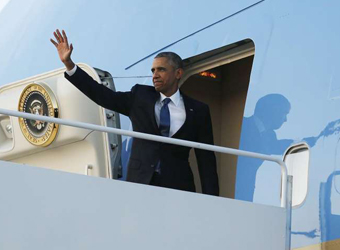 Following the inaugural ceremonies, Barack and Michelle Obama, private citizens once again,  were whisked off by a military helicopter stationed behind the US Capitol.

They’ll spend a few days on vacation at a California desert resort before, as Mr Obama tweeted from his personal account, getting “back to work”.

And, for Democrats, there’s a lot of hard work to be done. With Mr Obama’s departure, the party is only just beginning its long journey in the political wilderness.

Democrats have lost Congress and decimated in state legislatures. Their hoped-for liberal majority on the Supreme Court was blocked by intransigent Senate Republicans and now the presidency is gone, as well.

In the days ahead, the party that thought it had time and demographics on its side, that saw Mr Obama’s coalition of young, ethnic and educated voters as a durable governing majority, will try to figure out what, exactly, went wrong.

Ironically enough, some liberals are looking at the Tea Party grass-roots conservative movement that emerged in the months after Mr Obama became president in 2009 as a model for their path back to power.

At the time, many on the left mocked the impromptu outbursts of conservative protest – which bedevilled Democratic politicians at constituent meetings, as ill-conceived, uninformed or ineffective.

Now, they point to recent efforts to confront Republican legislators over attempts to repeal Mr Obama’s healthcare reform as signs of life in a dispirited party.

Democrats face a tough challenge in the days ahead. They have to settle on a leader for their national committee, resolving an ideological battle between left, wing populists and those who preach continued Obama-style moderation and incrementalism.

Hey need to devise a strategy to win back Congress, complicated by the fact they have to defend 10 Senate seats in states that Trump won in the upcoming 2018 mid-term congressional elections.

Before too long, candidates for the 2020 presidential nomination will begin jockeying for position.

More than anything else, however, they need to begin rebuilding their party on the local and state level.

Mr Obama’s successes glossed over a party that is bereft of young leaders working their way up through the ranks.

At the moment, the Democratic Party is a skeleton of its former self.

Until they put some meat on its bones, memories of the 2008 hope that Obama ushered in, that they were a party of destiny, will seem to liberals like a cruel joke.

Egypt’s economy: outlook and challenges in the eyes of global financial institutions