Peddlers law in front of the parliament in a few weeks 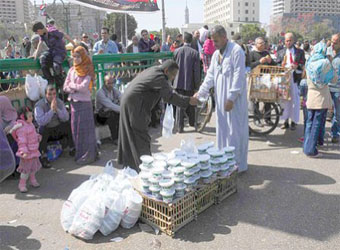 Societies’ federation for economic development has finished the preparation of a draft law to organize the work of peddlers, so as to present it to the parliament during this month to endorse the law in case of getting approved.

Ahmed Abd  El-Fattah -board member of the federation- said that the new draft law aims at ending the state of randomization controlling the trade movement between peddlers, as they are always described as thugs and outlaws, this law is supposed to helpful by reformulating  the nature of relationship between these sellers and the responsible authorities in the country.

Abd El-Fattah also said that another target of the law is determining who is assigned to the impose taxes on those peddlers, because there are multiple entities work on this regard, as well as finding a mechanism to deal between these peddlers and the Taxes authority to guarantee the right of the state and give them he legitimacy in exercising their business.

He also said that the draft law will be presented to the parliament during the next few days by some parliamentarians from the parliament and the Consultative council, who are also members of the societies’ federation for economic development, which includes a selection of other legal experts and economists who have contributed significantly in preparing the law.