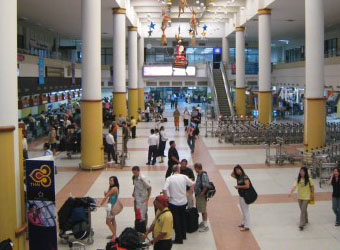 Forget images of luxurious pool villas and exotic eats. When it comes to air travel, passing through Phuket or Bali’s aging international airports is no afternoon at the beach.

As for Bali, back in 2010 Nurah Rai was included on a list of the world’s top 12 ugliest airports by Travel + Leisure.

“For an airport whose motto is ‘Gateway to Paradise,’ Ngurah Rai is confoundingly grim,” said the article. “Though it doesn’t look so terrible from the outside, inside is a dingy concourse that could really be anywhere, assuming anywhere is Cleveland.”

Ouch. Such descriptions are hardly in line with the image the tourism boards of these rival islands are trying to portray to the world. Which is why both are finally embarking on major renovation plans.

First out of the gate is Bali. A US$211 million upgrade has just begun at Ngurah Rai International Airport, according to news reports.

The project will include a brand new international terminal, while the current terminal will be used solely as a domestic airport. The new terminal will be able accommodate 20 million passengers after the project is complete in 2013.

Meanwhile, things are moving slower in Phuket, where reports indicate airport expansion plans — including a new international terminal –- won’t be finished for at least three years.

The problem is, the island’s airport is expected to reach breaking point this year says Bill Barnett, managing director of Phuket-based hospitality consultancy C9 Hotelworks, in a new report.

“Last year the airport already exceeded stated capacity by 30 percent with a total of 8.4 million passengers traveling through the terminal, and while the Thai government recently reignited a US$180 million expansion plan including the addition of a new international terminal, the anticipated completion date is not until 2015,” says Barnett.

“Clearly planning is behind the eight-ball with a 2015 date now firmly on the horizon. But with the upgrade only set to accommodate 12.5 million passengers, the new airport may be redundant by the time it hits the market.”