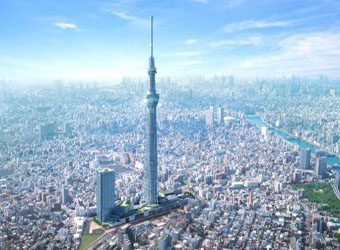 Construction was delayed after the March 2011 earthquake affected supplies to the site, according to a spokesperson talking to the age.com

The Tokyo Sky Tree, which cost approximately ¥65 billion (US$806 million), will provide services for digital radio and TV transmission as well as an aquarium, a theater, academic institutes and regional heating and cooling facilities.

It will also give visitors a chance to gaze across the city.

Two observatories are open to the public, at 350 meters and 450 meters. The latter also features an “air corridor” — a glass outer walkway.

The lower observation platform houses a restaurant, a cafe and a shop.

Developments around the foot of the structure will create a “town with a tower … to form a rich community caring for the people surrounded by clean air and lush green trees,” according to Tokyo Sky Tree press materials.

The somewhat gushy text goes on to add: “When Tokyo Sky Tree stands tall in the eastern sky from where the sun rises, a future community will be formed at its foot and it will be one of a kind that is filled with tenderness.”

Simulations have shown the tower is able to withstand an 8.0-magnitude earthquake, according to Hirotake Takanishi, PR manager for holding company, Tobu Tower Sky Tree.

The best times to visit will be winter days in January and February, whenTokyo’s usual haze is minimal, or at night when the skyline, as well as the tower itself, lights up. Admission to the topmost observation deck costs ¥3,000 (US$37) for adults; children pay ¥900-2,300 depending on age.