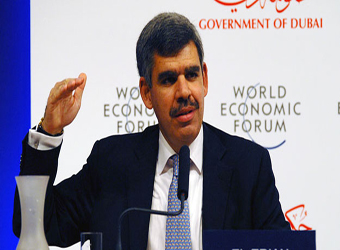 Pimco’s Bill Gross, manager of the world’s largest bond fund, reassured investors and clients on Wednesday that the departure of his heir apparent, Mohamed El-Erian, will not affect the performance of the firm.

“Believe me when I say, we are a better team at this moment than we were before,” Gross, co-founder and co-chief investment officer at Pimco, said in his monthly letter. “I/we take the future challenge faced by all asset managers with close to a sacred trust.” He advised readers to “stick with PIMCO.”

The shakeup comes as many investors are turning their backs on the kind of bond funds Pimco is famous for offering.

The Pimco Total Return Fund, which has $237 billion in assets, extended last year’s record net outflows in January, with investors pulling $3.5 billion from the fund over the month, Morningstar data showed on Tuesday.

“The evidence is very anecdotal, but there also appear to be at least some investors who are viewing Pimco’s latest shakeup — including El-Erian’s departure and the many other promotions, hirings, and departures that were just announced — as a major concern,” Morningstar senior research analyst Eric Jacobson said.

“At least some portion of the January flows are likely a result of these folks trimming their holdings in Total Return.”

Gross’s letters provide a glimpse into how influential bond investor Pimco’s assets, which measured $1.92 trillion in as of December 31 according to the firm’s website, will be managed.

While Gross commented on Pimco’s future without El-Erian, he dedicated much of his letter to the state of the U.S. economy, noting that the lower U.S. government deficit is slowing credit growth, which could hurt economic growth and risk assets.

Slower credit growth, Gross said, is negative for the economy in the near term since credit growth is critical to support prices of riskier assets.

“Our PIMCO word of the month is to be ‘careful,'” Gross said. “High quality bonds will continue to be well bid and risk assets may lose some luster.”

Gross said that 3-4 percent credit growth in the United States may not be enough to support 3 percent economic growth, especially if asset prices decline.

Gross also said that the Federal Reserve’s reduction in its monthly purchases of Treasuries and agency mortgages will contribute to the slowdown in credit growth.

The U.S. central bank announced a further $10 billion cut to its monthly bond buying last month. The Fed has implemented the bond-buying program in an effort to stimulate U.S. economic growth and lower long-term borrowing costs.

Despite the latest outflows from Gross’s fund, investment gains in January left the fund’s total assets roughly unchanged. The fund posted a total return of 1.35 percent last month after Treasuries prices rallied on some weak U.S. economic data and a rout in emerging market assets.

US Stocks Open with Slight Gains after Data