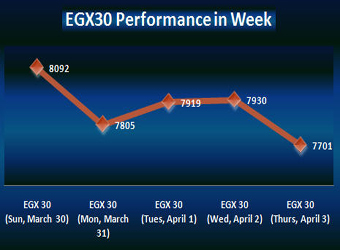 In a week, Egypt’s bourse incurred massive losses totalling 26.2 billion Egyptian pounds as local investors extended profit-taking bout on positions built in anticipation of former army chief Abdel Fattah al-Sisi’s run for president. The market was also reversely affected by the recent three explosions occurred outside Cairo University which killed at least two and wounded over seven. Consequently, the main stock index – EGX30 dived by 6.7% in a week to close below 7705 points in a week.

The market has dropped 8.0 percent over three days. It is still up 15.1 percent year-to-date, having surged on hopes that Sisi, seen by many investors as the best guarantor of stability, would run in this May’s elections.

When Sisi finally did announce his candidacy last week, investors started booking profits; the move was amplified by an earnings report by EFG Hermes, which swung to a net loss in 2013 because of one-off charges.

Back to the performance of the Egyptian Exchange’s indices throughout last week trading sessions, the EGX30 dived by 6.7% in a week, registering a decline of 550.72 points, ending Thursday’s transactions at 7701.11 points compared to 8251.83 points at the end of a week earlier.

The main gauge index registered its highest point on Sunday closing at 8092.38 points, whereas its lowest point recorded on Thursday at 7701.11 points.

Furthermore, the market capitalization closed at 461.292 EGP billion last Thursday, compared to EGP 487.442 billion at the end of a week earlier.

Local investors led the market activity all through the week with 72.73%, followed by Foreign and Arab investors with 15.90% and  11.38%, respectively, after excluding the deals.

Foreign investors were the most active sellers during the week earning the value of 236.86 million, after excluding the deals.

Arab investors were to buy by value of EGP 1.035 billion, after excluding the deals.

Moreover, institutions seized 50.26% of total trading through the week; while individuals attained 49.74% . Institutions were the most active buyers during the week earning the value of EGP 471.62 million, after excluding the deals.

The total volume of investment funds in the Egyptian Exchange equities reached around $1 billion, the market regulator chief said on Monday.

In a keynote speech at the 1st Annual Funds Conference in Cairo, Sherif Samy – Chairman of the Egyptian Supervisory Financial Authority (EFSA) – further stated that investment funds have been operational in Egypt for almost 20 years. That is why regulatory and legislative amendments were executed to activate investment funds in Egypt at real estate sectors along with other investment funds for securities and financial portfolios, he noted.

The recent amendments include the executive regulation of the capital market law, the issuance of new listing rules, and amendments to capital adequacy for brokerage firms.

Under the title “Mutual Funds’ Role in Supporting Egypt’s Economy”, the event is organized by Money Cycle, a specialized company in promoting the economic products/services in a different effective way that ensures success for the product/service and prosperity for the Egyptian economy.

Also on Monday, Egypt-based Beltone Financial Holding is planning to launch its draft prospectus for exchange-traded funds (ETFs) by the end of this week, according to CEO Alaa Sabaa.

On the sidelines of the 1st Annual Funds Conference kicked off in Cairo on Monday, Sabaa told Amwal Al Ghad about Beltone (BTFH.CA)’s plans to launch its ETFs prospectus by the end of the current week.

Beltone was the first firm to call for the launch of an index fund in Egypt in 2008, before the global financial crisis intervened.

Egypt’s stock market announced on Thursday it will apply new regulations for the unlisted centrally deposited shares by April 10th.

In a statement released today, the Egyptian Exchange (EGX) issued executive regulation no. 129 for year 2014 for the regulations and procedures of the Deals Market for the unlisted centrally deposited shares.

In this respect, Dr. Mohamed Omran, EGX Chairman stated that the new regulations oblige the brokerage firms to electronically notify the stock exchange about the operations to be carried out the unlisted centrally deposited shares and through e-mail.

“The brokerage firms should provide the company’s ISIN code, where EGX related committee should be only notified of the transactions of value EGP 20 million or more.” The top official noted.

Omran added that the new regulations that will save time and effort will be applied starting of April 10, 2014. These rules also stress on  the brokerage firms to verify all the documents of ownership of the unlisted centrally deposited shares; in addition to, preparing file of all such deals to be submitted to EGX anytime it is requested.