Protests in Hong Kong as China celebrates its National Day. 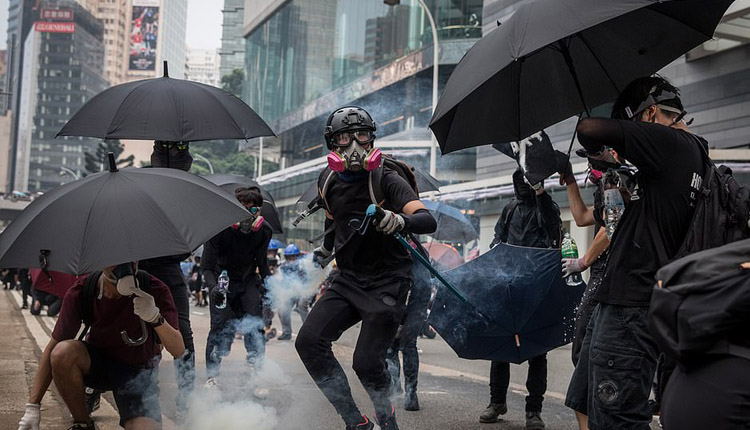 Demonstrators march through the streets of Hong Kong as China celebrates its National Day.

Hong Kong Police fired tear gas to disperse a crowd in a residential area on Tuesday afternoon as people take to the streets after their request to assemble was denied by authorities.

Early Tuesday, local politicians gathered inside the Convention and Exhibition Centre in Wan Chai to observe the flag-raising ceremony. Outside, two helicopters were seen flying across the harbor, carrying the Chinese national flag and Hong Kong flag.

Oct. 1 marks the 70th anniversary of the People’s Republic of China. While Beijing is expected to showcase its largest military parade yet, the special administrative region also has the day off as a national holiday.

The city’s embattled leader Carrie Lam is in Beijing to celebrate the National Day. Hong Kong usually hosts celebratory events for the PRC’s anniversary, but this year the fireworks and festivities were cancelled.

Hong Kong, a former British colony, returned to China’s rule in 1997. Since the handover, the region has operated under the “one country, two systems” principle that gives its citizens some legal and economic freedoms not given in mainland China.

Over the weekend, the Asia financial hub saw violent clashes on its streets, the latest in Hong Kong’s biggest political crisis since the handover.

The city has been engulfed by 18 consecutive weeks of mass demonstrations. While those protests initially started as peaceful marches, there have been an increasing number of violent clashes. The turmoil was sparked by a now withdrawn bill that would have enabled extraditions to mainland China from Hong Kong.

People have started to gather in the streets in Hong Kong ahead of the official rally, which is said to start at 1 pm, local time.

Some protesters have been seen holding up signs saying “Not My National Day, Proud to be British since 1841” outside the British consulate in Admiralty.

Under the colonial government, some Hong Kong citizens were given a British National overseas passport but it does not grant holders full U.K. citizenship rights.

Although the city’s leader has formally retracted the contentious bill, the public clamor has not relented and protesters continue to repeat their five demands. Martin Lee, former Hong Kong lawmaker and founding chairman of the United Democrats of Hong Kong, told CNBC on Tuesday that he has been fighting for democracy peacefully for over 30 years but “always ignored.”

He said the violence and vandalism from the young protesters are at least pushing the government to respond.

Looking ahead, Lee said that “this one country, two systems can end well,” but only if Beijing fulfills two conditions.

He said, Beijing needs to grant Hong Kong democracy, “to let our chief executive and all members of the legislature know that if they are not seen to be defending Hong Kong’s autonomy and freedom, they will never win the next election.”

“The second one, Beijing must not interfere in our internal affairs,” said Lee. He added that these two rights were both promised by Beijing during the handover, that “aside from defense and foreign affairs … we will be masters of our own house.”