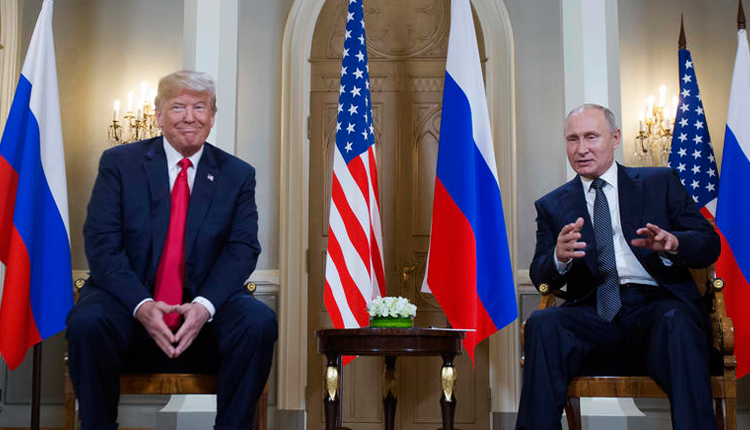 Russian President Vladimir Putin has said there are “forces” at work that are trying to hamper an improvement in his country’s relations with the United States.

Commenting on his summit with President Donald Trump in Helsinki, Finland, on Monday, Putin said, “We see that there are forces in the United States that are prepared to casually sacrifice Russian-U.S. relations, to sacrifice them for their ambitions in the course of an internal political battle in the United States,” Reuters reported.

Speaking after meeting Russian diplomats at the foreign ministry in Moscow, Putin added that “those forces are powerful” and that they were trying to “disown the summit results.” Putin did not name or specify what kind of forces he was alluding to.

Trump and Putin’s summit in Finland caused a furor after Trump appeared to publicly question the U.S. intelligence community’s conclusion that Russia meddled in the 2016 U.S. presidential election. Putin denied that Russia interfered in the U.S. democratic process and Trump said that the Russian president was “extremely strong and powerful in his denial.”

Trump’s comments prompted a rebuke from Republicans and Democrats alike and ex-CIA chief John Brennan said the remarks were “nothing short of treasonous.”

Putin said the summit had been a success overall and had led to “useful agreements,” Russian state agency TASS reported. However, he added that it would be “naive” to think that “years-old problems” between could be solved in the space of a few hours.

“The path to positive changes has all the same begun,” Putin said, according to Reuters. “It’s important that a full-scale meeting has finally taken place allowing us to talk directly.”

Facebook’s Oregon data centre to be supported by renewable energy