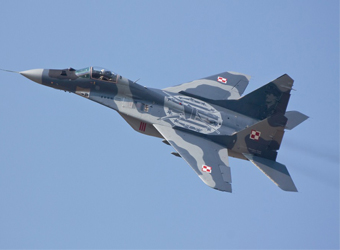 The ministry added it plans to study a U.S. Tomahawk cruise missile captured by Syrian forces in a recent attack, in order to improve Russia’s own missiles, RIA reported.

The ministry added it plans to study a U.S. Tomahawk cruise missile captured by Syrian forces in a recent attack, in order to improve Russia’s own missiles, RIA reported.

The announcement comes a day after Defense Minister Avigdor Lieberman said that Israel may strike the Russian-made S-300 anti-aircraft defense systems in Syria if they are used against Israel.

“One thing should be clear – if someone fires on our planes, we will destroy them,” Lieberman said in an interview with the Israeli website Ynet. “What’s important to us is that the weapons defense systems that the Russians transfer to Syria are not used against us. If they are used against us, we will act against them.” Russia’s ambassador to Israel on Wednesday played down tensions between the countries over Israeli attacks in Syria, saying they were not the reason for Moscow’s proposed supply of an advanced air defence system to Damascus.

The ambassador also played down the risk of a physical confrontation between Russia and Israel over Syria.

“I can’t imagine any such scenario,” he said in response to Lieberman’s threat. “We are mutually coordinating and updating about Syria … So far, there have been no incidents between us, nor even hints at incidents, and I hope there will not be.”

Lieberman’s comments come a day after senior Russian officials told the Kommersant newspaper that Russia is expected to provide the Bashar Assad regime with S-300 anti-aircraft defense systems soon. If Israel attacks the new air defense systems, then it will suffer “catastrophic consequences,” the officials said.

The S-300 PMU-2 “Favourite” version of the anti-aircraft systems will be provided to the Syrians for free and very soon, the Kommersant reported.

Lieberman said that the S-300 are already being operated on Syrian soil, though they are only being used by the Russians and not being employed against Israel. Lieberman added that Israel will not allow an Iranian foothold in Syria, saying that this is the principle guiding Israel. “If someone fires on us, we will respond. Let there be no doubt, it doesn’t matter what system – S-300, S-700 or something else.”

Russian air defense systems have, in fact, been deployed in Syria for years. Syria’s air defenses are Russian made, and Israel has struck them several times, lately – after the downing of its F-16 jet in February. The Wall Street Journal revealed that Israeli military targeted a Russian-made Tor advanced air-defense system after Iran deployed it to the T4 base in Syria earlier this month. In addition, Russia has deployed their own S-400 systems to protect its soldiers deployed in Latakia.

Foreign Minister Sergei Lavrov said on Monday that Russia had not yet decided whether it would deliver advanced S-300 missile systems to Syria, but would not make a secret of the matter if it took such a decision, the TASS news agency reported.

“We’ll have to wait to see what specific decisions the Russian leadership and representatives of Syria will take,” TASS cited Lavrov as saying on Monday during a visit to Beijing.

“There is probably no secret about this and it can all be announced (if a decision is taken),” Lavrov added.

The Kommersant reported that experts believed Israel would react negatively to the development and might bomb the area where the missile systems would be deployed.

North, South Korea leaders to meet at border for summit