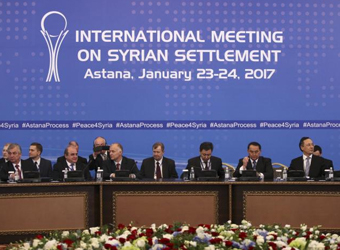 Russia, Turkey and Iran on Tuesday were working on a statement to reaffirm a fragile ceasefire between Syrian warring parties that could agree to establishing a mechanism to observe its compliance and pave the way for a U.N.-led peace settlement.

Delegations from the Syrian government and opposition were holding indirect talks for a second day in the Kazakh capital at a time when Turkey, which backs the rebels, and Russia, which supports Syrian President Bashar al-Assad, each want to disentangle themselves from the fighting.

That has led them into an ad-hoc alliance that some believe represents the best chance for progress towards a peace deal, especially with the United States distracted by domestic issues.

However, after two days of deliberations an initial draft communique suggests the powers have agreed little beyond reaffirming the need for a political resolution and to reaffirm a Dec. 30 ceasefire that each side accuses the other of violating.

Delegates from Russia, Turkey and Iran were wrangling over the terms of the final communique which would need to be approved – though not formally signed – by the government and opposition delegations.

U.N. Special Envoy for Syria Staffan de Mistura, attending the Astana talks, said the three powers were closing in on a final statement that would reaffirm and strengthen the current cessation of hostilities between the warring parties.

“We’re not far from a final declaration,” he told reporters.

Diplomats said there was a nuance in the language being used, with the Syrian government opposed to the use of the word ceasefire as opposed to cessation of hostilities, which suggests more short-term arrangements.

“If the guarantors want the success of this meeting they have to do something more on the ground,” senior opposition negotiator Osama Abu Zaid told reporters. “There are pledges from the Russian side to reinforce the ceasefire in areas where there are continued violations, but we’re waiting for more than just statements.”

A rebel source said they were discussing a draft of the final text with their Turkish backers.

A Syrian government source said consultations were ongoing to break obstacles presented by Turkey, which he said was trying to introduce elements beyond the Astana framework.

The draft statement from Monday includes a paragraph suggesting the powers would either consider or establish “a trilateral mechanism to observe and ensure full compliance with the ceasefire, prevent any provocation and determine all modalities.”

However, diplomats said there were still differences among the powers especially on the wording, including on how to resume peace talks under the umbrella of a United Nations resolution which calls for a transition of power.

It was also unclear whether Russia would be able to put pressure on Iran to force its militias on the front lines to abide by the terms of any ceasefire mechanism in areas on the outskirts of Damascus, where heavy fighting is ongoing.

“We’d like to think that the Russians are putting pressure on the Iranians, who are not very warm to the idea of a ceasefire or a political transition,” said a senior Western diplomat.

In a sign of perhaps some pressure on the Syrian government, a senior Russian official was quoted by Ria-Novosti news agency on Monday as saying he was concerned by recent violations of the ceasefire. In a rare reprimand, the source said that some Syrian government commanders had been “strongly reminded” of the necessity to abide by the ceasefire.

Some observers said the meeting, sponsored by Moscow and Ankara with the support of Tehran, could jump-start U.N.-led negotiations that were suspended in April.

De Mistura said on Monday it would be a major achievement if a the sides could agree a mechanism to oversee and implement a nationwide ceasefire paving the way for talks that he has proposed for next month in Geneva.

Trump: US committed to its military aid to Egypt