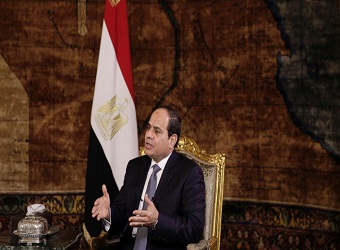 Egypt’s President Abdel Fattah al-Sisi announced Saturday a number of government decisions including the establishment of an authority for the development of Upper Egypt, which is tasked with creating jobs and maintaining Nubian monuments, with investments of up to 5 billion Egyptian pounds.

During the closing session of the second monthly youth conference in Aswan, the Egyptian president announced the launching of a national project to create several industrial zones for micro and small industries, as well as the establishment of 200 small factories in all Upper Egyptian governorates over the next six months.

Sisi also announced the expanding of the Takaful and Karama social safety programme in Upper Egypt to include creating employment for the offspring of families eligible for the programme.

The social solidarity ministry’s Takaful and Karama programme, established by the government in early 2015, is a national social safety net programme aimed at protecting the poor through income support.

Sisi said the government aims to make Aswan “the capital of the African economy and culture” as well as review the possibility of compensating those who were negatively affected by the building of the High Dam in the 1960s.

“I appreciate Egyptians’ sacrifices and resilience in achieving development, especially in Upper Egypt,” al-Sisi said in a speech during the conference, adding that he has absolute confidence in the Egyptian people and the residents of Upper Egypt’s capabilities to build their nation.

Sisi added that he instructed the government to take measures to improve the quality of living for Upper Egyptians, highlighting the efforts to develop the area.

“In 2014, we launched a project to reduce poverty and raise living standards in the governorates of Assiut, Sohag and Qena by granting loans for low income families for the implementation of small and micro-projects that has now reached 147 million pounds,” Sisi said.

In Upper Egypt, 238 projects were launched to develop 3,258 school classes, with 179 new classes built through an Egyptian-Japanese joint programme.

The program allocates 82 percent of its funding for Upper Egyptian governorates, with a total of about 1.1 million households, and has increased funding for food in schools to cover more than 9,400 schools at a cost of 850 million pounds in the academic year 2016-2017.

In the area of electricity and energy projects, a power plant with a capacity of 4,000 MW has been establishing in Beni Suef governorate with a total investment of 2 billion euros.

The two-day youth conference, taking place in the southern city of Aswan, brought together 1,300 young people from Upper Egyptian governorates, and is being held in one of the city’s hotels amid tight security measures.

The conference was attended by a number of MPs and ministers.

The first monthly follow-up conference was held in December.