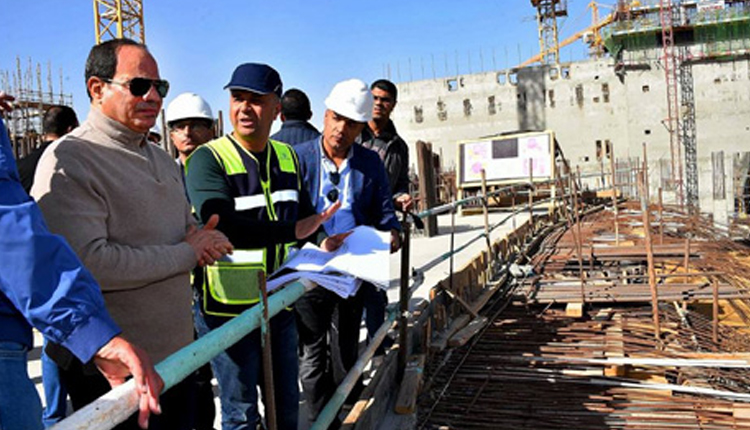 Egyptian President Abdel Fattah al-Sisi on Saturday inspected the arts and culture city in the country’s New Administrative Capital, which will include the Middle East’s biggest opera house.

In an official statement, Sisi’s spokesman Bassam Rady said the president visited a bunch of construction sites in the new capital, where he was briefed on the work being carried out.

The arts and culture city in the new capital will cover around 127 feddans of land and will include theatres, exhibition halls, libraries, museums, and art galleries for various forms of traditional and modern art.

Sisi also inspected the new opera house, part of the culture city, which will include a main hall which can accommodate 2,000 visitors.

Rady said Sisi praised the record time in which construction is being carried in the new administrative capital, and the harmony and coordinated efforts by different state institutions in that regard.

Construction of the new capital began in 2015 at a site 45km east of Cairo, as part of the government’s plan to reduce pressure on an overpopulated 20-million strong capital, expand urban areas and develop the nation’s infrastructure.

The capital, which is being built over 714 square kilometres by tens of thousands of workers, will be home to a government housing district, 29 ministries and other state institutions – including the cabinet and parliament buildings – and 20 residential neighbourhoods that can accommodate 6.5 million people.

Earlier this month Sisi inaugurated in the new capital the Nativity of Christ Cathedral, the largest in the region, and El Fattah El Aleem Grand Mosque, the biggest in the country.

Around 50,000 state employees will be reassigned from their Cairo offices to their new offices in Egypt’s New Administrative Capital in 2020.