Sony rolls out $1,587 projector that turns any surface into a touchscreen 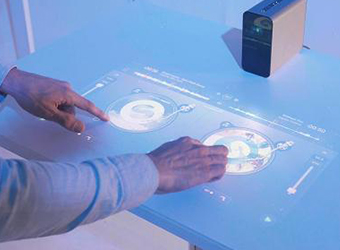 Sony unveiled last year a concept projector product that enabled users to interact with any surface as if it was a touch screen.

The prototype was buggy and difficult to use. But a year later, the Xperia Touch as it’s now called, has been vastly improved and Sony is commercializing the product.

In Spring, Sony will launch the Xperia Touch priced at 1,499 euros ($1,587) beginning in Japan and Europe and later coming to the U.S, the company announced on Monday at the Mobile World Congress trade show in Barcelona.

The Xperia Touch has built-in speakers and is small enough to be portable. It can project against both a horizontal and vertical surface with a screen of up to 80 inches. However, at 80 inches, the image loses its touch capabilities, something Sony said it is working on to improve.

Sony has been trying to push into new product categories amid stiff competition in smartphones where it has failed to gain significant market share. The company sees its future in the so-called Internet of Things (IOT) market, which refers to devices connected to the internet. To that end, it also showed off a concept product called the Xperia Ear Open Concept, which is a wireless earphone with a built-in artificial voice assistant. Last year, Sony unveiled the Xperia Ear but has since gone back to the drawing board and redesigned the concept. This has not yet been commercialized.

Analysts said that the Xperia Touch will not sell in large quantities because of its price, but it has been used to show Sony’s ability to innovate.

“It is an incredibly ambitious product and Sony should be applauded for having the courage to invest in a completely new area. At its current price it is out of reach to anyone but the most dedicated and affluent gadget lover but it may well be steering a course to the future of projection technology in people’s homes,” Ben Wood, chief of research at CCS Insight, told CNBC by email.