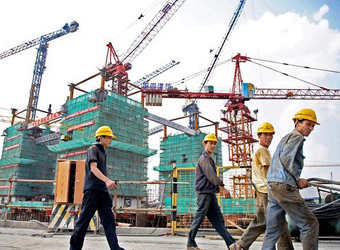 Turns out that “made in China” is not so cheap anymore as labour costs have increased rapidly in the country’s vast manufacturing sector.

Chinese factory workers are now getting paid more than ever: Average hourly wages hit $3.60 last year, spiking 64 percent from 2011, according to market research firm Euromonitor. That’s more than five times hourly manufacturing wages in India, and is more on par with countries such as Portugal and South Africa.

As China’s economy expanded at breakneck speed, so has pay for employees. But the wage increase has translated to higher costs for companies with assembly lines in China. Some firms are now taking their business elsewhere, which also means China could start losing jobs to other developing countries like Sri Lanka, where hourly factory wages are $0.50.

Apparel manufacturing has been hit “extremely hard,” said Ben Cavender, a principal at Shanghai-based China Market Research. “The result has been that factory owners have gone on a massive investment spree outside of China.”

Companies are also investing in robots in efforts to automate as much as possible to offset labor costs, according to Jefferies analysts Sean Darby and Kenneth Chan. China’s industrial robotics market became the world’s largest in 2013, and is continuing to grow.

With fewer jobs available — and perhaps more robots buzzing on factory floors — experts maintain unemployment will be an ongoing concern, especially as the government works to maneuver the world’s second-largest economy away from manufacturing and toward services.

“You’re talking about a way to re-skill millions of workers, but it’s not clear what jobs they’re going to be placed into,” Cavender said. “They’re creating white collar, clerical jobs here as quickly as possible, but it’s still not enough to go around.”

Sony rolls out $1,587 projector that turns any surface into a touchscreen