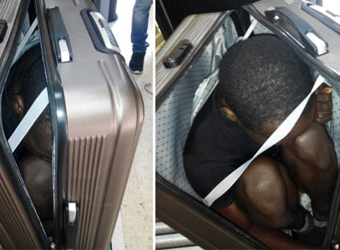 Police have detained two Moroccans who tried to smuggle migrants into Spain’s North African enclave of Ceuta – two hidden in a car and one in a suitcase.

When police checked a car on Monday one person was found hidden in the dashboard and another in the hollowed-out back seat.

The man and woman, thought to be Guineans, received first aid as they had had little air to breathe.

Separately, a young African man was found hidden in a woman’s suitcase.

That incident happened on 30 December and again the man – believed to be from Gabon – required urgent medical attention.

A 22-year-old Moroccan woman had tried to smuggle him into Ceuta, but customs officers ordered her to open the case, which was tied to a trolley.

The incidents coincided with a mass attempt by sub-Saharan Africans to storm the 6m (20ft) border fence separating Ceuta from Morocco.

Fifty Moroccan and five Spanish border guards were injured when 1,100 migrants tried to get over the fence on Sunday.

None managed to get through, but two people were injured scaling the fence and were taken to hospital in Ceuta. One guard lost an eye, officials said.

A similar assault on 9 December involved more than 400 African migrants.

There have been many such attempts by sub-Saharan Africans living illegally in Morocco, who desperately want to reach Europe. Melilla – Spain’s other North African enclave – is similarly targeted by migrants.

The enclaves are Europe’s only land borders in Africa.

Most migrants are intercepted and returned to Morocco, while those who make it over the fences are eventually repatriated or released.