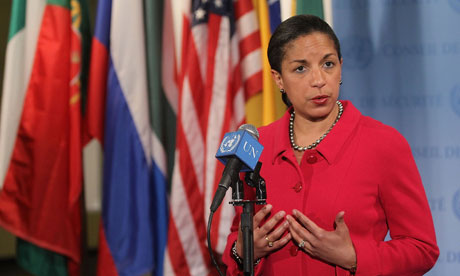 The United Nation Security Council has called for an “immediate” ceasefire between Sudan and South Sudan amid escalating border tensions and growing fears of an all-out war between the two neighbors.

A statement released collectively by the 15 members of the council and read out by Washington’s UN envoy Susan Rice on Thursday, expressed “deep and growing alarm at the escalating conflict.”

The conflict between the two neighbors has broken out since South Sudan seceded from Sudan in July, 2011.

“Our brothers in South Sudan have chosen the path of war, implementing plans dictated by foreign parties who supported them during the civil war,” Bashir said.

South Sudan’s President Salva Kiir has, meanwhile, said that his troops will not withdraw from the border region. In addition, Kiir threatened to seize the oil region of Abyei on the border with Sudan if the United Nations failed to pressure Sudanese forces out of the area.

The take-over prompted Sudan to pull out of crisis talks led by the African Union. The talks aimed at resolving the protracted dispute with Juba over oil, border demarcation, contested areas and citizenship issues.

The African Union has expressed deep concern over the escalating security situation on the contested border, calling for a troop pullout from border zones and the resolution of the problem through peaceful means.